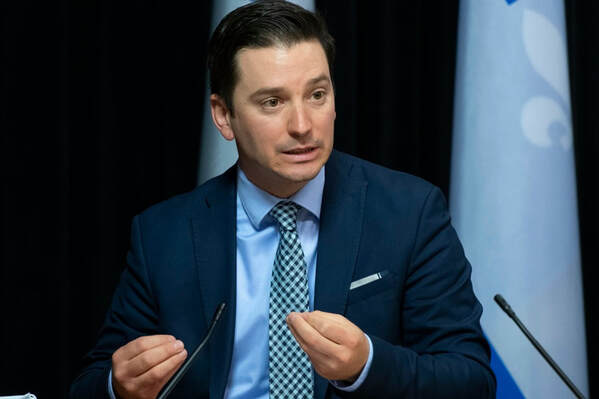 Justice Minister Simon Jolin-Barrette announced on Monday the establishment of a free service offering four hours of legal advice for people who are victims of sexual violence and domestic violence.
"These legal services will allow [victims] to be granted more autonomy, more security and more confidentiality in their legal proceedings," Jolin-Barrette said during a press briefing. These telephone and virtual consultations will be offered to all victims "without exception", regardless of their income level.

A team of 12 lawyers specializing in sexual and domestic violence will be created to offer these consultations, in “all areas of law related to this violence”. Mr. Jolin-Barrette specified that the service aims to answer "all the questions that may go through the minds of victims", whether at the level of childcare or family residence. In total, three million dollars will be invested each year to support this initiative.

This announcement follows one of the recommendations of the December 2020 report entitled Rebuilding Confidence , which was tabled by the Committee of Experts on Support for Victims of Sexual Assault and Domestic Violence. On September 15, Quebec tabled Bill 92 for the creation of a tribunal specializing in matters of sexual and domestic violence.

Address obstacles to access to justice
During the press briefing, the Minister of Justice also announced an enhanced partnership until 2024 with the legal clinic Juripop. The purpose of this agreement will be to offer training in sexual and domestic violence for lawyers. Those who have followed this training will be able to join the specialized bank of lawyers which offers services adapted to victims.

Present alongside Simon Jolin-Barrette, Juripop's Executive Director, Sophie Gagnon, spoke of the need to make the justice system a “more accessible place for victims”. "Juripop will represent almost 125 people victims per year with the mission of documenting the obstacles to access to justice […] and proposing innovative solutions to improve their course", she specified.

"Cover the entire Quebec territory"
With regard to the accessibility of the service for Aboriginals, Mr. Jolin-Barrette assures us that by offering consultations by telephone and videoconference, the team will be able to “cover the entire territory of Quebec”.

The latter maintains that the experience of the lawyers who will offer consultations will allow them to work with “all types of clients”. Mr. Jolin-Barrette added that one of the lawyers in the service had worked for the Commission des services juridique dans le Nord and was therefore "aware of the reality of indigenous people and communities".

"A step in the right direction"
For Sandrine Ricci, a sociologist affiliated with the Research Chair on Sexist and Sexual Violence in Higher Education Settings at UQAM, the announcement from Quebec is "a step in the right direction". "But we must work at all stages," said the latter, raising among other things the need to "better train the agents who receive complaints."

But wanting to change the justice system without tackling colonialism, sexism and racism is “anecdotal”, adds Ms.  Ricci. "We must let people take their place and take them seriously when they tell what they are going through," she stresses, pointing to the lack of credibility and inclusion that minority groups face.

The complex issue of sexual and domestic violence also requires that educational work be done from an early age, argues Sandrine Ricci.