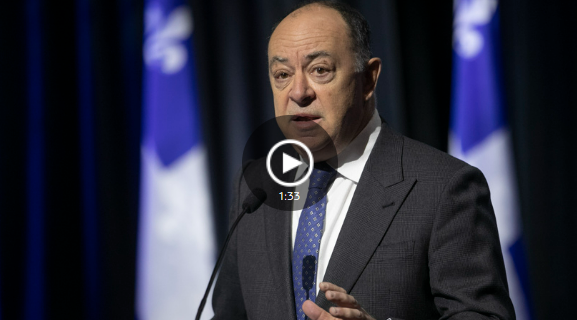 (Quebec) Christian Dubé backs down on a controversial aspect of his bill to extend medical assistance in dying to people with a serious and incurable disease. The government is removing sections that made people with neuromotor disabilities eligible.
The opposition parties took turns recalling Thursday that this aspect of the bill had not been studied by the special transpartisan commission on the evolution of the Act respecting end-of-life care. His report, tabled last December, recommended, among other things, in Quebec City that "an adult and capable person may make an advance request for medical assistance in dying following a diagnosis of a serious and incurable illness leading to incapacity."

To pass the law before the end of the session, the opposition parties demanded that the government stick its legislation to the issues addressed in the consensus by the commission.

In a press scrum on Thursday, the Minister of Health and Social Services, Christian Dubé, said he wanted first and foremost consensus on this issue. Earlier in the day, he also spoke with the president of the Collège des médecins du Québec, Dr. Mauril Gaudreault, to explain that the government would proceed in a second step, during the next Parliament, on the issue of eligibility for people with neuromotor disabilities.

"I explained to Dr. Gaudreault this morning that I could not take a risk of derailing this bill with this point. So, I told him that it was gone handed over. We will come back with that when parliamentarians and Quebecers are ready," said Mr. Dubé.

In May 2021, the Collège des médecins recommended to the special commission to include the notion of neuromotor disability, such as quadriplegia, to harmonize Quebec law with that of the federal government. Paraplegia, cerebral palsy and amputation after an accident are also serious neuromotor disabilities.

"Medical assistance in dying is a highly sensitive issue that must move forward in consensus. It is important for us that the situation be clarified so that doctors can provide this care legally and serenely to eligible people who request it, "reacted Thursday the College.

Geriatrician David Lussier said he understood the government's retreat, even though he himself supported the original bill.

"Federal law allows it. Quebec is the only place in Canada where this is not allowed. It will have to be included, because otherwise, it will be far too complex to manage," said Dr. Lussier, a member of the Commission des soins de fin de vie, in an interview.

The doctor now hopes that the debate on the inclusion of neuromotor disabilities in the law can take place after next fall's elections. "There is too little time now to debate. But I understand that the government will want to postpone this debate. »

With the collaboration of Gabriel Béland and Fanny Lévesque, La Presse, and The Canadian Press
HUGO PILON-LAROSE
PRESS
Medical assistance in dying| Quebec retreats for people with neuromotor disabilities | The Press (lapresse.ca)
up