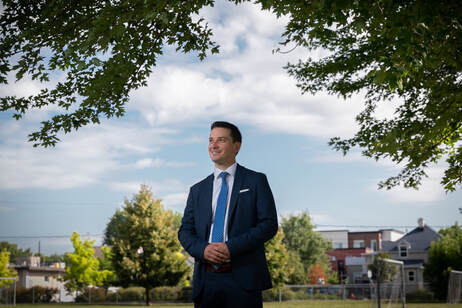 Simon Jolin-Barrette wants to catch up with Quebec by regulating the practice of using surrogate mothers, which is currently legally invalid in Quebec. Couples therefore come to go to other provinces to start a family. The issue will be addressed in a bill to be tabled this fall, marking the first phase of the long-awaited reform of family law.
(Quebec) One file does not wait for another for the Minister of Justice, Simon Jolin-Barrette. Described as "indefatigable" by his close guard, described as wanting to rush parliamentary work by the oppositions, the one who also wears the hat of government parliamentary leader does not intend to slow down. And his next major project: modernizing family law.

This vast reform is long awaited and demanded (see the next tab). Her predecessor, the current President of the Treasury Board, Sonia LeBel, had already split it in two. In an interview with La Presse , Mr. Jolin-Barrette confirms that he will finally table a first bill this fall concerning the issues of parentage. The second part, on conjugality, will have to wait.

“It is not normal that it takes 40 years to reform. Families have changed, we must update the law. […] The legal reality must be adapted to today's families and, above all, to the interests of the child, ”pleads the Minister of Justice.

An important issue in the first part of the reform of family law is the delicate question of recourse to surrogate mothers. In Canada, surrogacy is not criminal, if it is done free of charge. However, in Quebec, contracts between surrogate mothers and intended parents are considered “absolutely null” according to the Civil Code.

In other words, explains Mr. Jolin-Barrette, “even if people make this kind of contracts -
and these contracts are present in Quebec - they are not valid”.

"It takes a frame"
The Minister of Justice intends to correct the situation. "It takes a framework for the benefit of the interests of the child and to avoid the commodification of the female body," he announces.

In his eyes, Quebec is lagging behind other Canadian provinces, where the use of surrogacy is marked out. Here, couples sometimes leave the province to carry out their parenting plan in another jurisdiction.

"Everything must be well standardized with all respect for the woman who decides to wear for others, but also according to the interests of the child and the ethical issues [which are] attached to it", affirms Mr. Jolin -Barrette.

It is important to properly supervise everything to ensure that there is a balance and that this is for the benefit of both the intended parents and the interests of the child and the surrogate mother.

The Minister of Justice, Simon Jolin-Barrette

This first family law reform bill will also deal with issues related to knowledge of origins and gender identity.

More bite for the protection of French
Simon Jolin-Barrette will also begin public hearings on Bill 96, which reform the Charter of the French language, on September 21. It was generally well received when it was tabled last spring, and Simon Jolin-Barrette said he was open to giving it more bite.

All the measures that will improve the situation of French, provide tools to protect and enhance the French language, I will be open to listening to them and to improving the bill.

The Minister of Justice, Simon Jolin-Barrette

However, the minister is closing the door on the idea of ​​imposing additional restrictions on what is provided for in the bill in terms of access to college education in English. "The position that the government has taken is reasonable and it will remain," he replies to those who would like Quebec to simply apply Bill 101 to CEGEPs.

With this parliamentary committee, the start of the fall session will be busy for Simon Jolin-Barrette. Especially since the minister and his wife are waiting for the imminent arrival of their second child, he slips in an interview. A news that he announces with emotion, thus making a rare opening on his family life. For this reason, he will be absent from the caucus for the government's re-entry into parliament in September.

Workaholic (he was already praising it in 2018 in his book I trust - Reflections (without cynicism) of a young politician ), the Minister of Justice responds to those who tell him that he is doing too much that "one should not be afraid of working in politics".

“My method is to ensure that we work on several substantive files simultaneously in order to be able to deliver. Of course, it takes a lot of work, politics, but the reason I am a member of Parliament is to make changes, ”he said.

“We're going piece by piece,” he concludes. Reforms have waited too long. "

A long-awaited reformFamily law reform has been long overdue and demanded. Brief trip back in time.

The case of Eric v. Lola
In January 2013, in the highly publicized case of Éric v. Lola, the judgment of the Supreme Court of Canada sheds light on the evolution of different marital models in Quebec since the last reform of family law in the early 1980s. a family, today's parents also live in a common-law relationship, among others. These de facto spouses - and their children - do not benefit from legal protections adapted to their reality in the event of separation.

The Roy report
In spring 2013, the justice minister at the time, Bertrand St-Arnaud, creates an Advisory Committee on Family Law and entrusts the presidency to M e  Alain Roy. The professor at the Faculty of Law of the University of Montreal specializes in family law and juvenile law. With a team from the world of law and social sciences, on June 8, 2015, he submitted a voluminous report (nearly 600 pages) to the new Minister of Justice, Stéphanie Vallée. The document contains 82 recommendations on various subjects: marriage, civil union, filiation, assisted procreation, etc.

Public consultations
While a government response to the Roy report is long overdue, the legal community is mobilizing to recall the importance of family law reform. In the spring of 2018, the Chambre des notaires du Québec set up a Citizens' Commission on the issue. During the 2018 election campaign, the main political parties in Quebec recognized the urgency to act. When it came to power, the government of the Coalition Avenir Québec and its Minister of Justice, Sonia LeBel, began a public consultation on the subject.

On the eve of a first bill
The new Minister of Justice, Simon Jolin-Barrette, announces that a first bill on the reform of family law - dealing with issues relating to filiation - will be tabled in the fall. The second bill on conjugality issues will be tabled later, he told La Presse , without committing to this second part being dealt with before the end of this legislature.
HUGO PILON-LAROSE
PRESS
https://translate.google.com/translate?hl=en&sl=auto&tl=en&u=https://www.lapresse.ca/actualites/politique/2021-08-30/quebec-s-attaque-a-la-reforme-du-droit-de-la-famille.php
up