Religious heritage must return
to the heart of the debate 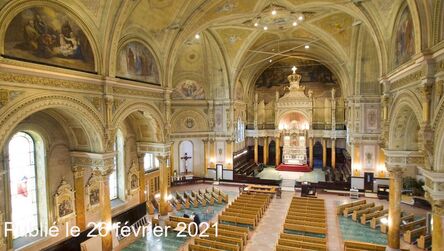 Over the past ten years or so, the idea of ​​safeguarding religious heritage has gradually faded from public debate in favor of a discourse that has swallowed it up as one element among others of a so-called “cultural” heritage, which is intended to be more general and encompassing.

Yet, in Quebec, religious heritage constitutes, both quantitatively and qualitatively, the essential part of our heritage, both built and intangible, with that of the Catholic Church in the foreground, for historical and cultural reasons.

Thus, despite the conclusions of the 2016 report entitled  The cultural heritage of Quebec: a collective heritage to be included in modernity, by Michelle Courchesne and Claude Corbo, which essentially repeated the recommendations made ten years earlier in the Commission's report of the culture of the National Assembly of Quebec entitled Believing in the religious heritage of Quebec,Quebec's new Cultural Policy, “Everywhere, Culture”, unveiled in 2018, did not retain any of this. It is still the policy on a case-by-case basis, the emphasis now being on the “requalification” of so-called “surplus” places of worship, facadism, even vandalism that does not speak its name. The Auditor General's Report 2020-2021 is silent on the question of religious heritage, and Bill o 69 does not deal more.

Likewise, there is no policy relating to religious heritage which would have been adopted by religious authorities and, first and foremost, by the Assembly of Catholic Bishops of Quebec, the disparities being, from one diocese to another. , flagrant, that of Montreal having imposed a moratorium on the sale of its places of worship, while the cloth burns in Rimouski between the diocese and the factory of the Saint-Germain cathedral as for the future of this church.

Here then is a religious heritage which is neither more nor less abandoned to its fate, dependent on the decisions that will be taken (or not) by the religious authorities who remain owners, under the watchful eye of the State and civil society, which wash their hands.

On June 8, 2010, during the saga surrounding the safeguarding of the Très-Saint-Nom-de-Jésus Church in Montreal and its great organs, we launched the Manifesto for the Safeguarding of Quebec's Religious Heritage.

With the support of more than a hundred signatories, we asked Premier Jean Charest to cease ad hoc and à la carte interventions, by providing Quebec with a genuine overall cultural policy (integrating religious heritage) coherent, stressing that there was no point in continuing to invest in its preservation in this way if, five years after the granting of a grant, the Church can unilaterally decide to resume its count this heritage and dispose of it as you wish!

The merit of the Manifesto was to question the dogma of the ownership of places of worship and to propose their nationalization by the State, like what was done in France more than a century ago, the Law of December 9, 1905 concerning the separation of the Churches and the State constituting a true legislative framework of safeguard in the matter, assigning the places of worship for this use. This Manifesto, however, lacked ambition, with hindsight, limiting itself to only suggesting the nationalization of certain places of so-called “national” interest, rather than aiming for a universal application to all of the religious heritage of Quebec, following the example of the French solution, the Cultural Heritage Act having moreover substituted for this notion of “national” interest that of “public” interest.

Currently, the Cultural Heritage Act is based on discretionary powers conferred on the Minister, both with regard to the classification of property and the authorization regime for acts carried out in the protected area of ​​a classified heritage building or with regard to a declared or classified heritage site. Bill n o 69 only provide limited supervision of these discretionary powers, only with respect to the licensing system, as to the application process. Nothing is planned for any framework for the discretionary power of classification requests, and this is where the shoe pinches, because arbitrariness should give way to a mechanism based first and foremost on expertise,
likely review and appeal in Superior Court.

Finally, since the subject of religious heritage has gone by the wayside and, with it, the legitimate questions surrounding its property and the prerogative incumbent on the owners, ultimately, to decide on their own what will be deemed "surplus", not without having previously skimmed over public subsidies and other tax advantages, the death knell for Quebec's religious heritage is sounding, now "requalified", an unsurpassable and unspeakable horizon, which takes the place of government policy on heritage in this region,
thus contributing to the wreck of our civilization.

According to the report Believing in the religious heritage of Quebec, in 2006, the members of the Committee on Culture said they shared the opinion formulated by a former president of the Committee on cultural property, Louise Brunelle-Lavoie, who considered that the adoption of a general policy on heritage "is a prerequisite for any revision of the Cultural Property Law", adding that "there is no point in making piecemeal amendments to correct certain tools if the logic of together is absent ”.

This is the path the Government of Quebec should follow. N Bill o 69 should therefore be removed, as long as this reflection is based on the faith of many existing reports, and involving experts and stakeholders heritage, not only in architecture, but also art, music and organ. Ultimately, a concordat should take place between the State of Quebec and the various denominations present on its territory, with the Catholic Church in the first place. In the words of Victor Hugo, "we owe the past to the future". Posteri, posteri, vestra res agitur.
THE DUTY
Antoine Leduc & Daniel Turp
https://translate.google.com/translate?hl=&sl=fr&tl=en&u=https%3A%2F%2Fwww.ledevoir.com%2Fopinion%2Fidees%2F595231%2Fle-patrimoine-religieux-doit-revenir-au-coeur-du-debat%3Futm_source%3Dinfolettre-2021-02-15%26utm_medium%3Demail%26utm_campaign%3Dinfolettre-quotidienne
up