Removing God from the classroom: a Masonic plan to shape the minds of American children

return
The secularization of the public schools that began nearly a century ago has today made the classroom a special danger to the moral virtue and religious faith of American youth. 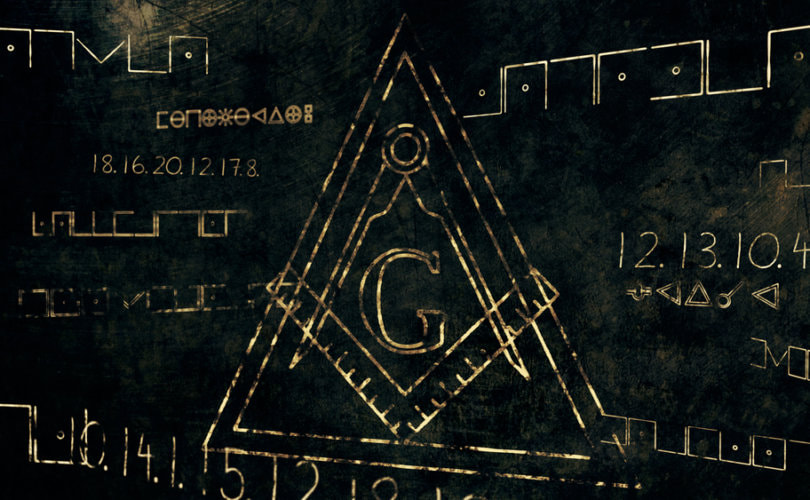 – Just over a century ago, the Southern Jurisdiction for Scottish Rite of Freemasonry in the U.S. drew up a plan for the secularization of America’s public schools and the indoctrination of the minds of American youth through the imposition of a natural religion within the walls of the classroom. That plan took decades to carry out, and its results are unravelling today. If the deplorable intellectual and moral state of the nation’s schools is ever to be remedied, the political maneuvers, policies, and court rulings of the Freemasons, which have landed America in its present crisis, must be known. A bird’s eye view of the landscape in education will be but a beginning in the attempt to address the problem.

Current crisis in educationPublic education has long been in the news headlines in recent years. Notably, Virginia saw a change of governor in large part due to the scandal of a school cover-up of a rape that took place at a public-school during school hours. Governor Youngkin found ample material for his campaign in the Left’s disdain for parental rights and oversight of the education of their children. He ran defending the natural role of parents as educators of their children and advocated for accountability toward parents on the part of school boards, faculty, and administration. Unsurprisingly, he overwhelmingly won.

Again, the exposure of children to every kind of sexual perversion through drag queen shows now haunts schools, libraries, and even churches throughout the country. Pornographic material is used for sex-ed classroom instruction. Curricula indoctrinating innocent minds in homosexual and transgender ideology is being imposed as early as kindergarten. State after state is debating legislation on women’s sports, and the use of locker rooms, bathrooms, and showers by men who have “transitioned” or “identify” as women. Puberty blockers are being given to elementary children without the knowledge of parents. And children are told to withhold from parents their supposed desire to “transition” to the opposite sex, should their parents be suspected of opposing the mutilation involved in such a process.

“Critical race theory” is being pushed in schools in a re-reading of American history wholly interpreted according to Marxist theories of racial domination and class struggle. Children are taught to hate their country, its history, and its heroes.

While pornography is shown in public schools, and a history taught undergird with atheistic Marxism, the reading of the Bible is prohibited, public prayer banned, and displays of the Ten Commandments or Beatitudes strictly proscribed. Religion has no place in public education, as it is a wholly private affair, established as such, we are told, by the Constitution, through the “wall of separation of church and State.”

Funding for religious schools through the GI BillWhile such is the current state of public education in the U.S., this was not always the case. In fact, less than 80 years ago, the federal government passed a law funding higher education for all veterans of WWII, for any school of their choice — public or private, secular or religious — contrary to the notion that religious schools cannot be funded by government in America. The 1944 “G.I. Bill of Rights” included no restrictions on what kind of school a veteran could attend while qualifying for government funding. A U.S. congressman, Sen. Aiken, later noted that as a result, this meant the federal gov was in fact “paying… to educate priests, Protestant ministers and Rabbis.”

Interestingly, in the congressional debate held on the G.I Bill, no suggestion was made that the separation of church and state, or the first amendment, prevented the federal government from funding education conducted by religious institutions or churches.

According to Paul Fisher’s detailed account of the issue in Behind the Lodge Door, “at no time during discussion of measures involving aid to church schools, including the G.I. Bill of Rights and other legislation debated in Congressional Committees prior to Everson, did any Congressman or Senator—most of whom were lawyers—suggest that such legislation violated the Constitution.” (p.180)


Fisher shows that “the entire legal history of federal support for church institutions performing public services, demonstrated that such government accommodations were clearly Constitutional, and indeed, had been upheld repeatedly by the Supreme Court.” (p.180)

So strong was the sentiment that religion should be aided and supported in some form by government, that after the landmark 1947 Supreme Court Everson decision that cut federal funding from religious schools, a professor at the University of San Francisco, Peter Dunne, wrote to Justice Hugo Black on the Supreme Court in protest that the judgment was contrary to American principles.

“The American people,” Dunne wrote, “have always aided religion in many different ways and they aided all religions. For your enlightenment on what is good Americanism, read the Annals of the Congress of the United States, volume one, where the debate on the wording of the First Amendment is given. It becomes evident from a study of this record that the framers of the Amendment wanted religion to be aided; that they feared the very interpretation which you have so illogically given.”

If such was the American sentiment and legal history, how did the country come to reverse this understanding? How was all trace of religion, and now, all trace of moral decency, systematically removed from American public education?

Masonic plan for public education in AmericaThe intention within Freemasonry to take control of public education would come as no surprise to those knowledgeable of Masonic history in France and Europe. As Paul Fisher notes, “the Fraternity successfully campaigned in France to promote universal obligatory lay education and the use of school texts with Masonic values.” (p.54) Details of Masonic involvement in French public education can be found in an article by Mildred Headings titled, “French Masonry Under The Third Republic,” The John Hopkins University Studies In Historical And Political Science, vol.64.

But to most Americans the story within U.S. government of Masonic court rulings and influence on public education is largely unknown. In light of the current cultural battles for the minds and hearts of young children — battles increasingly being waged within the walls of our schools — we would do well to understand the backdrop of the present crises, namely, the Masonic takeover of public policy and the legislation governing education. Only a full dismantling of the structures and laws the Masons put in place will allow
for a revitalizing of the education of American minds.

In 1871, Scottish Rite Freemason Albert Pike wrote Morals and Dogma of the Ancient and Accepted Rite of Freemasonry, a work that would come to be acknowledged as the basis for Masonic philosophy for the Southern Jurisdiction of Scottish Rite Freemasonry in the U.S., a jurisdiction claiming the membership of many Presidents and Supreme Court Justices. In the book, Pike asserts, “It is the province of Masonry to teach all truths, not moral truths alone, but political and philosophical, and even religious truth.” (p.148)

In 1920, in Colorado Springs, the Scottish Rite Supreme Council drew up a plan for the future of public-school education in the United Staes. According to Fisher, it was a “comprehensive education plan for the youth of the country. The plan called for the sending of all children through public schools for a certain number of years, and recommended the careful selection of school trustees and teachers, as well as supervisors of school textbooks and libraries in order to exclude ‘sectarian propaganda’.” (p.55) By sectarian propaganda, the Masons meant religious materials, religious instruction, and religious practice of any kind.

The plan also called for a national Department of Education whose secretary would be appointed as a member of the President’s Cabinet. This would assure that a Masonic President, or one friendly to the Lodge, could easily impose the secular
agenda the Scottish Rite desired spread throughout the country.

Only two years after the 1920 Masonic plan for public education was drawn up, the State of Oregon, assisted by the Scottish Rite Supreme Council and the Masonic Imperial Council of the Nobles of the Mystic Shrine, declared Catholic and other parochial schools illegal. The law was declared unconstitutional in 1925 by the U.S. Supreme Court in Pierce v. Society of Sisters, but the case made two things clear. First, it manifested how far the Masons wished to go in their hatred of religious education. Second, it meant the opinion of the Court would have to change, which the Lodge subsequently sought to accomplish from within the Court over the course of the next several decades.

Efforts to establish Department of Education and impose natural religionTen years passed after Pierce v. Society of Sisters, and the Masonic program of secular public education had yet to see any tangible fruits at the national level. Notably, the Masons had yet to establish a Department of Education within the federal government. On their own admission in the Masonic journal New Age, this was mostly due to the opposition of the majority in the House Committee on Education, who were Catholic. “So long as this condition exists in Congress,” the journal declared, referring to the Catholic majority in the Education Committee, “there will be little opportunity for creating a Department of Education.”

Commenting on the consequences of the situation within Congress — which would eventually be overcome from without by several Supreme Court rulings — Fisher surmises that “it is now apparent, that if a handful of Catholic members of the House Education Committee had not prevailed, and subsequently been succeeded by equally steadfast Catholic Congressmen and Senators into the very early 1960s, every public school child (including this writer) might have been propagandized with naturalism as the established national religion, long before the Masonically-dominated Supreme Court effectively imposed that curriculum on the nation’s public school system when it outlawed Bible reading and school prayers in 1962 and 1963.” (p.56)

According to a work by Richard Gabel, Public Funds For Church and Private Schools, 1937, Horace Mann — a Mason and one of the great advocates for free, public schools — sought to advance “character education without ‘creeds,’” since Mann held that “natural religion stand[s]… preeminent over revealed religion.”

The Everson CaseVarious legal fights ensued in Congress in the 1940’s regarding legislation on school funding. Bills were introduced that provided funds for both public and private schools, only to be countered by measures funding public schools alone. Then with a Masonic President having stacked the Supreme Court, the long-desired Masonic majority on the bench was at last achieved. This majority was maintained from the 1940’s into the 1960’s, and with that majority, in 1947, in Everson v. Board of Education, the Supreme Court finally drew down the hammer on all Congressional debate surrounding school funding. The Court declared the providing of public funds to directly assist or encourage religious education “unconstitutional,” thereby barring government support of all religious schools. In so doing, the Court also began in earnest the process of secularizing the public schools through a wholesale curtailing of all traces of religion according to the Masonic plan laid out in 1920.

The ruling of the Court reflected the Masonic Scottish Rite Principle No.5 on the matter of public education, a principle mentioned by Justic Hugo Black — himself a Freemason and the Justice who penned the majority opinion in Everson — in a letter dated April 5, 1945, addressed to a fellow Mason, Sen. Lister Hill. According to Principle 5, one goal of Scottish Rite American Freemasonry was “the entire separation of Church and State, and opposition to every attempt to appropriate public moneys—federal, state or local
—directly or indirectly, for the support of sectarian institutions.”

life site
Raymond
Maria
Removing God from the classroom: a Masonic plan to shape the minds of American children - LifeSite (www-lifesitenews-com.translate.goog)
up