Resuscitate is not resurrected

return
Should patients with COVID-19 always be resuscitated in CHSLD? The issue has stirred social media in recent days. But for Alain Vadeboncoeur, it is in the order of things to offer rather comfort treatments. Analysis and reflections on the subject. Ponsbeing now behind us, let's talk a little about resuscitation, not to be confused with the resurrection. It is that there has been a lot of talk in recent days, in relation to patients in accommodation with COVID-19. Often by mixing the two.

It is therefore necessary above all to clarify the facts surrounding resuscitation, which unfortunately do not produce miracles.
In this context, it is even futile care, with risks for those who provide it.

It's sad, I know. Maybe not easy to read. We would like our older relatives not to be sick; their illnesses are not too serious;
that if it gets serious, they come back to us quickly. Even in case of cardiac arrest.

One imagines the scene: our grandmother falls unconscious, heart massage, shock with a defibrillator, the next moment she opens her eyes and smiles at us. Except that it  is a scene, precisely, too often overused in fiction, which helps to maintain harmful myths.

Reality is not like that at all. In the context of the elderly in the shelter, the best we can do for those people we love too much is not
to resort to treatments that will lead to nothing except unnecessary suffering.

I read several outraged comments when we learned of the ministerial directive  proposing not to perform cardiac
massage in patients affected (or potentially affected) by COVID.

Many protested: where are their rights? How can we deny them last-chance care? Why condemn them?

First, it should be noted that in the guidelines, one can still attempt some form of resuscitation, the most important, is the use of the defibrillator. CPR is then requested, mainly because it exposes caregivers to the patient's aerosols that may contain the virus.

But above all, beyond the techniques used, all that could be achieved, at best, by resuscitating these patients, is a more or less long stay in intensive care that involves suffering, not to mention the false hopes maintained in families.
Suffering cardiac arrest

It is true that some cardiac arrests are at "good" prognosis. Classic example: I am 56 years old, healthy, sudden pain in the chest (a heart attack), my heart  is racing into severe arrhythmia, cardiac arrest, I lose consciousness, my daughter calls 911 and starts the cardiac massage, the ambulance arrives in three minutes, an electric shock is given, my  heart  goes back, I regain consciousness, I am transported to the hospital, my heart attack is treated, and here I am! Sounds simple, doesn't it?

First of all, the "shock" part is still allowed in the directive. But the most important thing is that this scenario, where everything is ideally happening, concerns a minority of patients, who can hope for the positive, a significant chance to go to the hospital, to be treated there and then to come out with all his head and autonomy. Even in these favorable circumstances, only a third will survive..

This "ideal" scenario therefore has nothing to do with that of a person living in a long-term care facility, for several reasons,
which will significantly compromise the prognosis.

It is already known that for patients over 65 years of age (average age of 75 in this Australian study,in a health care system comparable to ours) in a shelter, survival from cardiac arrest remains marginal, in the order of 2 out of 100, and that none of them regain their previous abilities.
The result is zero 98 times out of 100. For both survivors, the additional loss of functional abilities is unenviable.

It should also be understood that in patients who are sufficiently affected by COVID-19 to be hospitalized, the mechanism leading (sometimes) to cardiac arrest has nothing to do with my hypothetical case described above.

COVID-19 first attacks the lungs,causing an inflammatory reaction compromising oxygenation for the most severe cases. This disruption of lung activity leads patients to intensive care, in part because of the need to combat the decrease in oxygen caused by lung damage.

When the problem progresses, you often have to "intubate" a tube in the windpipe and plug it into a respirator to make up for poor breathing, a treatment that usually lasts from one week to 10 days when everything is fine.

Inflammatory damage can also affect the heart muscle. Thrombosis (circulatory blockages) also affect several organs. As with all severe diseases of this type, most vital organs, whose functioning is severely disrupted, are sometimes spiralled by what is described as an "inflammatory storm" caused by a very particular protein discharge, cytokines.

It is called a simultaneous attack of several vital systems, potentially pushing patients into cardiac arrest, by a mechanism then much more complex than the "simple" stop caused by a heart attack. The stop occurs at the end of the race (or by direct heart disease).

Very few patients get away with it, let alone in a satisfactory neurological condition. In a series of publishedcases, 136 of these cardiac arrests caused by COVID-19 were observed to have survived 30 days, only one with adequate neurological condition — less than 1%. And these were all patients, not just the oldest, the group most at risk of complications.

Inflammatory damage can also affect the heart muscle. Thrombosis (circulatory blockages) also affect several organs. As with all severe diseases of this type, most vital organs, whose functioning is severely disrupted, are sometimes spiralled by what is described as an "inflammatory storm" caused by a very particular protein discharge, cytokines.

It is called a simultaneous attack of several vital systems, potentially pushing patients into cardiac arrest, by a mechanism then much more complex than the "simple" stop caused by a heart attack. The stop occurs at the end of the race (or by direct heart disease).

Very few patients get away with it, let alone in a satisfactory neurological condition. In a series of publishedcases, 136 of these cardiac arrests caused by COVID-19 were observed to have survived 30 days, only one with adequate neurological condition — less than 1%. And these were all patients, not just the oldest, the group most at risk of complications.

The conclusion is obvious: to have cardiac arrest in the aftermath of care for COVID-19 is generally fatal, regardless of age and basic condition. It is just as sad, but it is the reality. Combine two gloomy predictions
If you combine the hosting factor with the COVID-19 factor, which is also the case with an infection severe enough to cause cardiac arrest, there is no chance. What about an attempt at resuscitation in this context of zero prognosis?

It is simply a futile treatment, which should not be offered to patients with this condition, nor would we consider offering them,
I do not know, an antibiotic or a hip replacement.

This treatment, resuscitation, which does not work in this context, could cause unnecessary suffering if the person temporarily regains, for a few hours or a few days, a heart activity and a semblance of life. It is a form of therapeutic doggedness,
something that no one wants for themselves or their loved ones.

To perform such resuscitation, a situation conducive to the spread of the virus in the environment, also exposes caregivers to an undue risk of contamination, especially when one is less accustomed and especially when one does not have all the necessary protective equipment.

All caregivers must protect themselves before undertaking resuscitation manoeuvres, which prolongs delays. 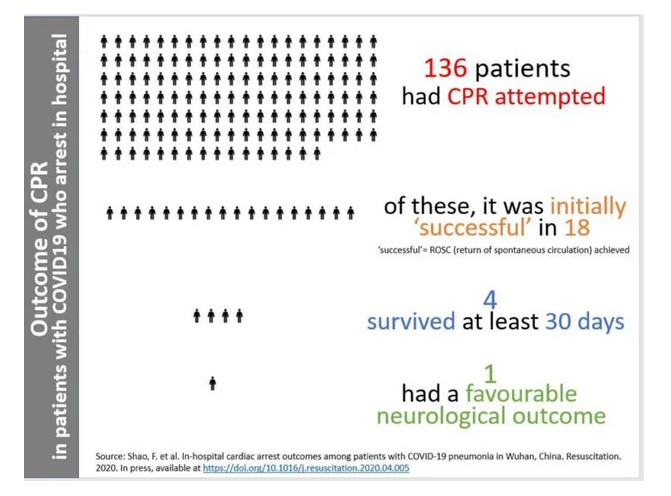 All of these considerations should have been discussed in advance with the person (or their family if they are unfit) and decisions to resuscitate or not made in advance. This is the case for the majority of patients in CHSLD, for whom the accepted conduct is not to attempt to resuscitate.

It's about providing what's most important, quality comfort care and a reassuring presence in the circumstances.
We need to talk about it and talk to our loved ones about it.

When a person is housed, caregivers usually establish what are called levels of care, which are the treatments the person wants to receive if the worst happens. Two colleagues of mine having produced a well-made video to explain this difficult subject and clarify things,
I invite you to listen to it

I do not think that care with patients should be offered in this necessary discussion with patients that has no chance of success, such as resuscitation in the context of housing the elderly in CHSLD, whether or not the patient has COVID-19. Although it remains a sensitive subject, some people feel "condemned" if there is no attempt at resuscitation.

This is not wrong: in the event of cardiac arrest, if you do not resuscitate, the person will not survive. But as we have seen, even if there is resuscitation, we can only get a temporary survival or (rarely) discharge from the hospital without having recovered his abilities. This type of prognosis should be addressed when deciding with the patient the desired level of care.

Requesting that resuscitation not be performed in the event of cardiac arrest in a person in CHSLD with COVID-19 may seem inhumane, but to do otherwise would not do anyone, and certainly not the person concerned, any favour. It remains to better relieve people at the end of life, which constitutes truly humanized care at this end stage of a long life.

Thank you to Dr. Alexis Cournoyer, emergency physician and researcher, and Claudie Roussy,
nurse practitioner in cardiology, for pointing to some data on resuscitation rates.
up