Roe has fallen: These states are already protecting the unborn

RETURN
Numerous states had anticipatory 'trigger bans' on the books ahead of the Supreme Court's decision on Dobbs, while others are able to re-enact historic anti-abortion laws which, until now, had been superseded by Roe. 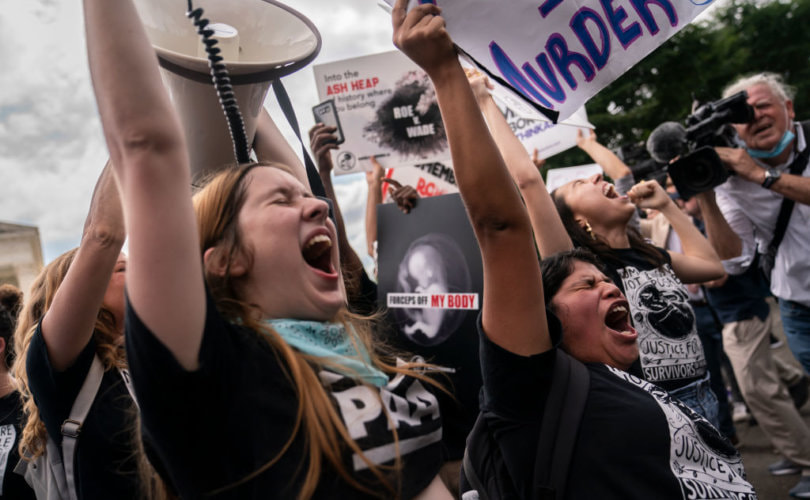 (LifeSiteNews) – Many U.S. states have outlawed abortion in the wake of the Supreme Court overturning the 1973 Roe v. Wade ruling, largely owing to “trigger laws” set up in anticipation of the historic decision.

State authorities acted swiftly to enact abortion bans, with Missouri Attorney General Eric Schmitt announcing that Missouri would be the first state to protect life in the womb by banning abortion just minutes after the Court’s decision on Dobbs had been handed down.

“With the Dobbs decision just handed down and a stroke of my pen – Missouri became the first state to effectively end abortion and has become the most Pro Life state in America,” Schmitt tweeted Friday morning. 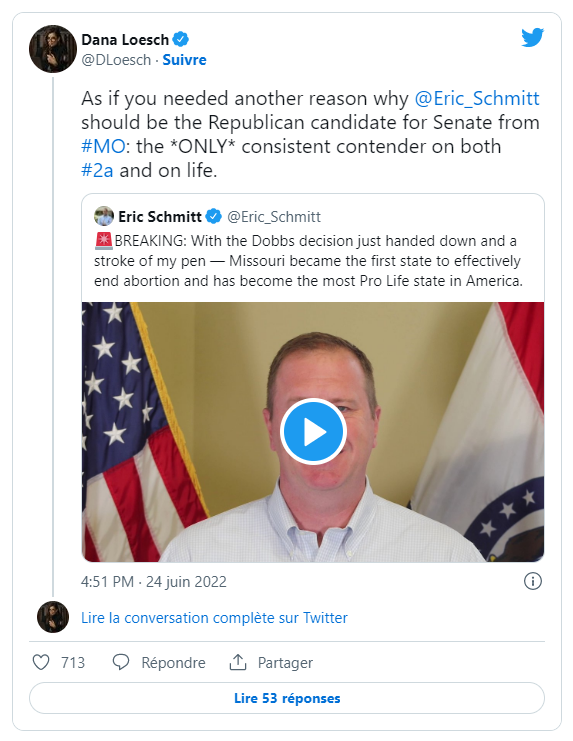 “Here in Missouri, the people’s voice has already made clear that Missourians respect the sanctity of human life. We believe that without the explicit protection of the right to life, all liberties are under attack, which is why the importance
of this day cannot be overstated,” Schmitt said in a Friday press statement.

“I am humbled to be a part of this, and the first Attorney General in the country to effectively end abortion. As a long-champion of the rights of the unborn and Missouri families, I pledge to continue to fight for our most fundamental right, the right to life.”

South Dakota Gov. Kristi Noem released a press statement Friday announcing that “as of today, all abortions are illegal in South Dakota.”

“Every abortion always had two victims: the unborn child and the mother. Today’s decision will save unborn lives in South Dakota, but there is more work to do,” Noem said. “We must do what we can to help mothers in crisis know that there are options and resources available for them. Together, we will ensure that abortion is not only illegal in South Dakota – it is unthinkable.”

Arkansas Attorney General Leslie Rutledge on Friday afternoon implemented the state’s 2019 “trigger law,” stating that “the only time that an abortion is legal in Arkansas is to save the life of the mother.”

Kentucky Attorney General Daniel Cameron announced that abortion is “for all intents and purposes over”
in Kentucky following Friday’s ruling on Dobbs.

In an advisory opinion issued Friday, Cameron noted that the 2019 Kentucky Human Life Protection Act “prohibits abortion in most circumstances. Generally speaking, it states that no person may knowingly cause or aid in
‘the termination of the life of an unborn human being.’”

“The prohibition on performing abortions in KRS 311.772 became effective on June 24, 2022, the date on which the Supreme Court issued its decision in Dobbs,” the attorney wrote.

Ohio Gov. Mike DeWine confirmed on Friday that the state’s “Heartbeat Bill” banning abortions after detection of fetal cardiac activity, typically after 6-weeks’ gestation, had gone into effect after Attorney General Dave Yost filed for dismissal of a three-year injunction on the bill that had blocked its enactment until Roe was overturned. 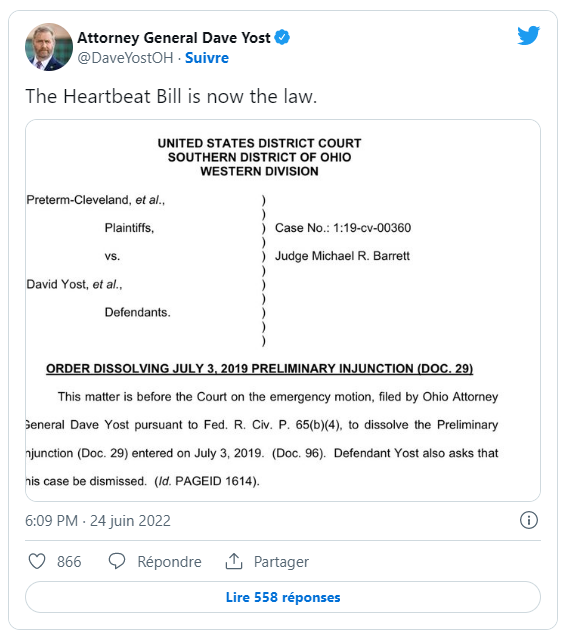 A further five states – Alabama, Arizona, Michigan, West Virginia, and Wisconsin – which did not have the “trigger laws” in place are nevertheless able to outlaw abortion immediately due to historic bans on the barbaric practice, previously superseded by Roe, now coming back into force.

However, the Democrat governors of both Michigan and Wisconsin have initiated processes in state courts to overturn the historic abortion bans in their respective jurisdictions. Gov. Gretchen Whitmer of Michigan announced she would “fight like hell” to stop the state’s 1931 abortion ban from being re-enacted, as it is currently under temporary injunction.

Wisconsin Gov. Tony Evers has said that he will “do everything” in his power to overturn Wisconsin’s 1849 abortion ban,
which has come into effect following the toppling of Roe.

As many as 26 states are now expected to introduce strict limitations on abortion procurement.

Meanwhile, the governors of west coast states California, Oregon, and Washington have vowed to ensure that women can still kill their unborn children within their state boundaries in a “multi-state commitment,” declaring the region a “safe haven” for “all people seeking abortion.”