return
The latest data from Guelph-Wellington-Dufferin Public Health highlights the effects. In the last three years, the number of students identifying as 'non-binary' has tripled from 150 to 650 students – 3.5% of the total.
​ 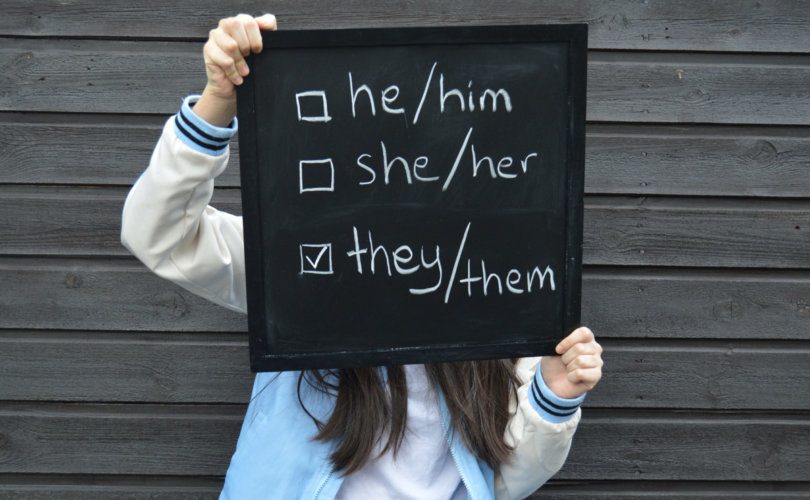 (LifeSiteNews) — What do you suppose is more likely: that for all of recorded human history, a not-insignificant percentage of the human population has been “non-binary” – neither male nor female, biology be damned – and they are all collectively emerging now? Or that spiking numbers of “neithers” – almost entirely among young people currently being indoctrinated
by LGBT-infused curriculums – are being taught this stuff?

The term “non-binary,” by the way, was the successor to “gender-queer” and only emerged as a term used by activists in the 1990s. It was popularized by LGBT activist Riki Anne Wilchins, who used it in a 1995 essay in the inaugural issue of In Your Face, using it to refer to those who identified as either genderqueer or gender nonconforming. Now, however, the term is positively popular amongst the young people – especially since activists are no longer the fringe: they’re running the show.

The latest data from Guelph-Wellington-Dufferin Public Health highlights the effects. In the last three years, the number of students identifying as “non-binary” has tripled from 150 to 650 students – 3.5 percent of the total, according to the Well-being and Youth Health Survey. According to Dufferin Child and Family Services CEO Jennifer Moore: “More organizations including ourselves have noticed an increase in 2SLGBTQ+ youth and especially youth identifying as non-binary and using a variety of pronouns. In response we have been expanding our programming at DCAFS to include parents and peer workers in order to meet some of these needs.”

Stevie Forbes-Roberts, a clinician who works with DCAFS and runs GLOW 2SLGBTQ+ Youth Group, sees this as a positive. “In general, I think we’re going to see more LGBTQ people come out at earlier ages, which for a lot of reasons is a good thing. We do see worse mental health outcomes for people who keep a secret that they feel ashamed of for 40, 50 years, which often happened in the past. We see that in high schools that there’s a group of queer and trans kiddos who are kind of protecting each other.”

Forbes-Roberts also said that digital learning was a factor. “People got to put the names they use up on the screen. They were mis-gendered less often in online classes because they didn’t talk. They weren’t on camera. If their voices are higher octaves or lower octaves, it didn’t matter. So a lot of them did find it safer than being in a live classroom.” He noted that many parents have observed that identifying this way is “trendy,” but predictably rejects that assertion. “I think that when kiddos are exploring their sexuality or their gender identity, it’s a part of normal development and something that children are experiencing and learning from. And responses like that make the child or teen feel like their parents are not understanding their experience.”

In his view, Ontario schools have a long way to go. “I don’t think schools are safe. But I think things are shifting slowly.” According to Guelph Today, this data is just evidence that the queering of public schools needs to escalate:

Part of that shift comes from students educating teachers, and teachers seeking more education in general “because they realize they don’t know how to support these students.” But more needs to be done.  For instance, they said there needs to be more 2SLGBTQ+ youth groups and more gender-neutral bathrooms.  Currently, all 76 public schools, plus school board offices, have at least one “For Use By All” washroom, according to Heather Loney, UGDSB communications manager. The same goes for all the catholic schools in the region; the number of gender-neutral washrooms in each varies depending on the size of the school.

But Forbes-Roberts said the issue is not necessarily that there isn’t one, but that it might only be one. If it’s far from class, students who need to use it could find themselves regularly late, they said.

They said they’ve heard from students that a lot of the gender-neutral bathrooms end up having lineups because everyone can use them – which puts students at risk of being outed or bullied because they’re using the gender-neutral bathroom, they said… Regardless, Forbes-Roberts said the next step is for society to “move towards all bathrooms being gender neutral.” They also said all teachers should be given education around gender identity. Ideally, the more supportive the school is around gender identity,
the more supportive parents will be as well.

This, of course, will simply reinforce the feedback loop. Kids are taught from preschool or kindergarten that gender is a spectrum and that you can choose any point (or none at all!) on the spectrum as your “gender identity”; they are encouraged when they pick anything that isn’t “cisgender” (a term nearly always used as a pejorative); the teachers tell the confused parents, some of who rightly notice that this is trendy, that their duty is to support and affirm anything their child decides; LGBT programs encouraging these children get more funding and grow in response to the success of their recruitment efforts. The conclusion? A totally gender-neutral society, with “all bathrooms being gender neutral.”
Ladies and gentlemen (can I still say that?): Canada’s public schools.
life site
​Jonathan
Van
Maren
Canada's public schools are egging children on to declare themselves 'non-binary' - LifeSite (www-lifesitenews-com.translate.goog)​
up