RETURN
First Lady Jill Biden cheered their decision, but 'incredible dads' do not willfully deprive their children of a mother.  What all the Buttigieg cheerleaders have in common is that they focus on the emotional needs of the two men about to become parents while ignoring the plight of the child or children about to become part of their household. 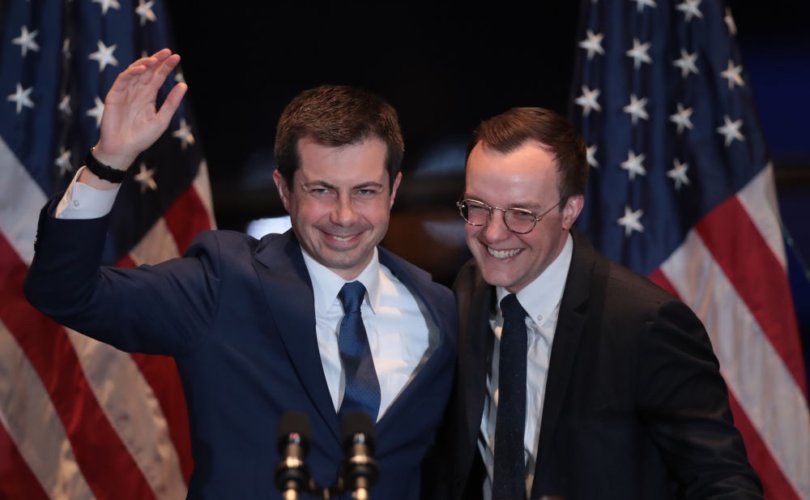 WASHINGTON, D.C. (LifeSiteNews) — Homosexual Biden administration Transportation Secretary Pete Buttigieg and his “husband” Chasten have announced that they are now parents, ostensibly declaring they will deprive the child its mother.

“For some time, Chasten and I have wanted to grow our family,” tweeted Buttigieg, former mayor of South Bend, Indiana and contender for the 2020 Democratic presidential nomination.

“We’re overjoyed to share that we’ve become parents! The process isn’t done yet and we’re thankful for the love, support, and respect for our privacy that has been offered to us. We can’t wait to share more soon. 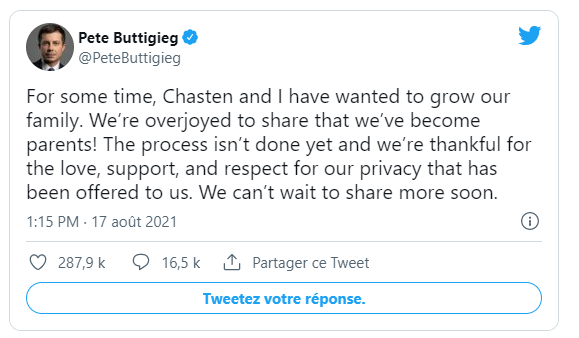 Leftists —who are at best ambivalent about whether children are deprived of a mom or a dad when raised in homosexual or lesbian households— expressed support for the first openly gay cabinet secretary’s parental intentions.

“Congratulations to you and Chasten!” cheered First Lady Jill Biden. “Welcome to parenthood!” 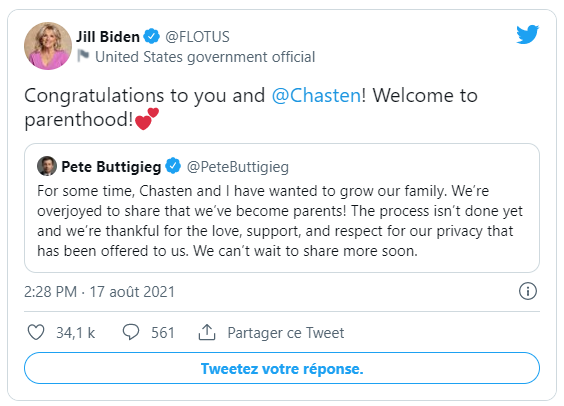 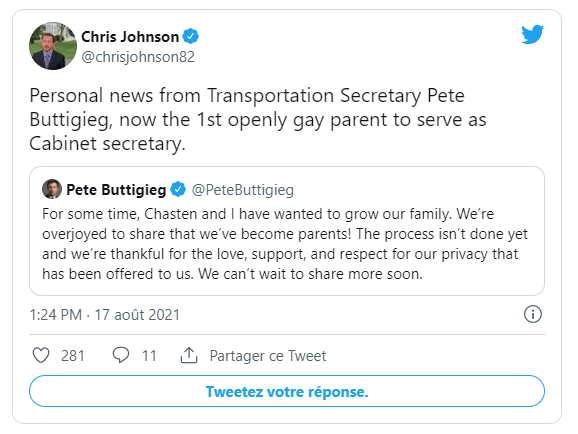 “We’re so happy for you! You and Chasten are going to be incredible dads,” gushed Vice President Kamala Harris’ husband, Douglas Emhoff.   “Sending love from me and VP.” 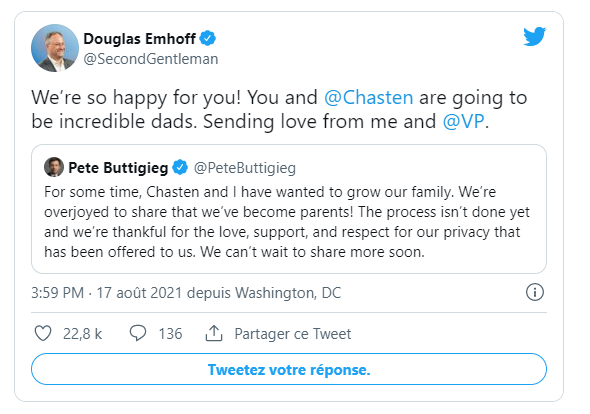 “Incredible dads,” however, do not willfully deprive their children of a mother.

No matter how the Buttigiegs “grow their family,” a child loses

While it’s unclear whether the homosexual couple are obtaining a child through adoption or via surrogacy,
both paths are highly problematic for the child involved.

Child advocate Katy Faust, founder of the children’s rights organization, Them Before Us and author of a book by the same name, summed up on Twitter the losing proposition for the future Buttigieg child — one  which will hold no matter how
​the child finds its way into the Buttigieg household: 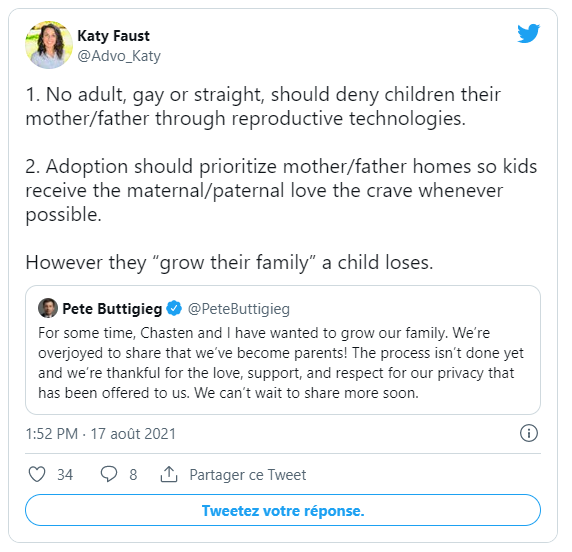 “That poor child,” tweeted radio show host Dr. Christine Bacon.  “Starting life off already at a great disadvantage and exposure to disordered thinking that she will one day need to reconcile.”

During a CNN town hall meeting (video here), Buttigieg revealed that when matters of conscience for Christians and best practices for serving orphaned children are pitted against the demands of homosexuals and transgenders to acquire children to alleviate their loneliness, LGBT demands should trump the rights of all others.

In Pete Buttigieg’s strange worldview, an orphaned child’s right to both a mom and dad “harms” gays, and the deep-seated hunger that every child has for both parents of both sexes discriminates against gays.

In essence, Buttigieg sees all kids as born prejudiced. He deems active homosexuals as bigger ‘victims’ than orphaned children.

‘No one thinks of the kids anymore’

When Buttigieg first unveiled his intention of obtaining a child with his ‘husband’ in 2019, Katy Faust tweeted about the media’s unquestioning welcome of Buttigieg’s announcement.  She conveyed the message of a man who had been raised by gays: “I’m a man who had to grow up with a gay dad & his lover. I hated it. I really did. No one thinks of the kids anymore. No one in media WISHES TO ASK about them, anymore, at all. Thus, NO questions to “Mayor Pete” re whether children get a father AND mother. ” 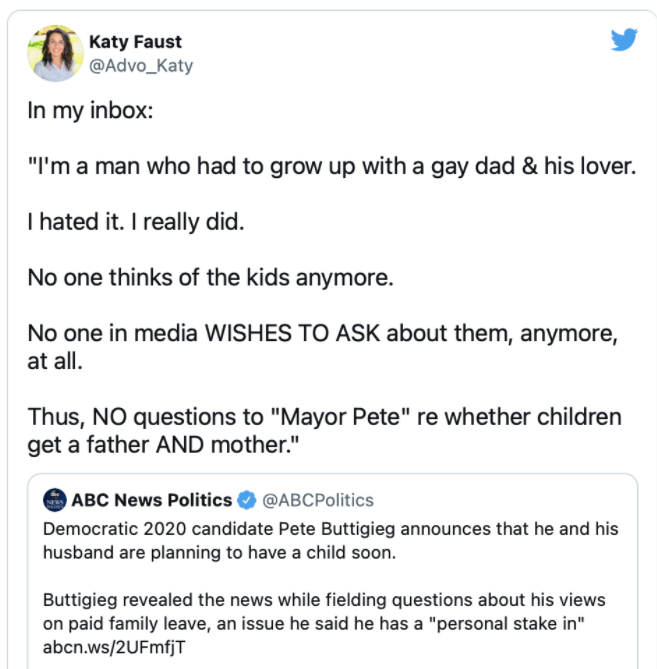 Children need and deserve to be raised by their two biological parents whenever possible.  They don’t need two parents of the same gender, no matter how loving, how famous, or how wealthy those parents are.
LIFE SITE
Doug Mainware
https://translate.google.com/translate?hl=en&sl=en&tl=fr&u=https%3A%2F%2Fwww.lifesitenews.com%2Fblogs%2Fhomosexual-white-house-cabinet-secretary-pete-buttigieg-plans-to-deny-child-its%E2%80%AFmother-homosexual-white-house-cabinet-secretary-buttigieg-plans-to-deny-child-its%E2%80%AFmother%2F&anno=2&sandbox=1
UP