RETURN
Justin Trudeau is chucking our money at LGBT groups. What are the chances Pierre Poilievre does anything to change that? 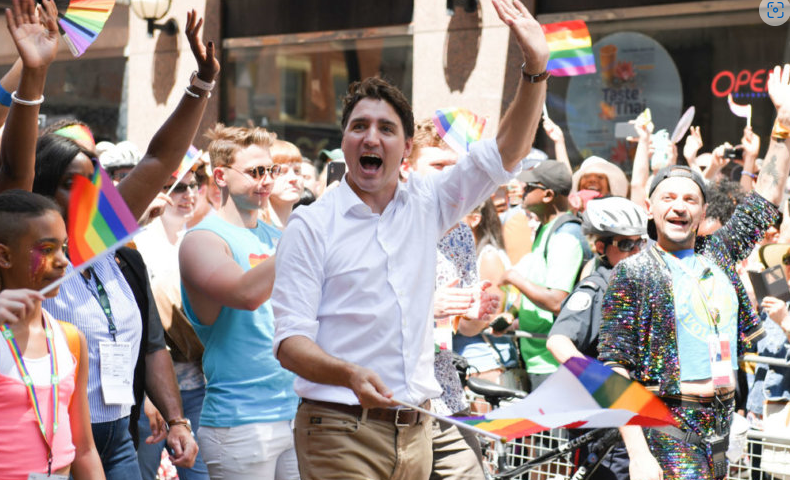 (LifeSiteNews) – Justin Trudeau has once again become a punching bag for Fox News host Tucker Carlson – this time over his self-satisfied announcement that he is committing $100 million in taxpayer dollars (those are dollars you worked hard for, if you’re Canadian) to his government’s new “2SLGBTQI+” plan.

You may have noticed that the “LGBT” acronym is an ever-evolving thing, with “2S” or “two-spirit” shuffled to the front of the line to genuflect towards queer indigenous folks, and the plus sign tacked on the end like the spare Athenian altar towards the unknown god – it’s important to cover your bases in the new rainbow religion.

Trudeau, no doubt, is chuffed by negative coverage from the likes of Carlson, but it is more interesting to note that Canadians are starting to get fed up with this stuff, too. It’s not just that inflation is pinching or that nearly everyone has more to worry about, or that it is hilarious to claim that the LGBTetc. community is oppressed in a society that throws a month-long party funded by various arms of government just to celebrate their existence and commits enormous sections of the public school curriculum to inculcating kids into their worldview. It’s that Trudeau is so smug and so out of touch that this comes off as virtue signaling even to those who support the general direction in which he is heading.

Ann Levy of True North noted that the whole thing came off as pretty cynical:

It was no doubt partly an attempt to throw a shiny object into the social media and legacy media-sphere to distract from the government’s bad week during which it was revealed that Laith Marouf – funded by the Heritage ministry to conduct ‘anti-racism’ courses across Canada – was exposed as a virulent antisemite… According to the plan – which is chock full of words that appear to be from the Gender Studies departments of our woke universities – it was developed using a gender-based analysis/intersectional approach.

That suggests some 2SLGBTQI+ people are impacted by colonialism, ableism, sexism, classism, systemic racism – the latter straight from the tenets of Critical Race Theory which suggests blacks and by extension black LGBTQ folk are more oppressed than similar white folk. In fact, the plan itself says that such people experience ‘minority stress.’

The document is a potpourri of progressive piffle, noting $43 million or more in “capacity building grants,” whatever those are, and cash for trans activists like Jenn Smith who, Levy notes, is a radical bigot. Johnstone, her brainchild, will be getting some taxpayer dollars:

Johnstone has a history of accusing anyone who questions radical gender ideology – that attempts to indoctrinate elementary school kids – as being ‘TERFs (trans-exclusionary radical feminist) and transphobic’ as well as messengers of ‘anti-trans hate.’

Good stuff. Hard-working Canadians must be delighted that the big chunk of change the government lifts from their pay cheque each month is handed directly to people who hate anyone who doesn’t think men can become women and thinks that this country is a colonial hellhole filled with folks in need of re-education.

Smith isn’t the only one, either – millions of dollars will be going to various LGBT community groups, the sorts of organizations that ensure your local library is stacked with the requisite number of drag queens and that schools and youth organizations are appropriately queer.

Trudeau may be virtue signaling, but he believes all this stuff with his whole heart. And the reality is that once these programs and funds are established, it is likely a permanent pipeline from the taxpayer’s wallet to the trans activists – even if the next prime minister is a Conservative.

Pierre Poilievre, for example, has voted for every aspect of the LGBT agenda in recent years, including the so-called “conversion therapy” ban that prohibits pastoral and parental conversations. The likelihood of him reversing Trudeau’s grand LGBTetc. plan is next to nil, so get prepared to pay for the LGBT agenda for many more years to come.
LIFE SITE
Jonathan
Van
Maren
Trudeau's pro-LGBT virtue signaling has real consequences for Canadian taxpayers - LifeSite (www-lifesitenews-com.translate.goog)
UP