Quebec will create a specialized tribunal 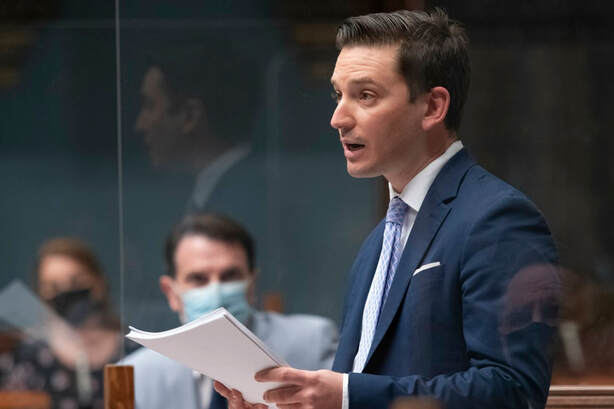 (Quebec) The Legault government is moving forward with the creation of a tribunal specializing in matters of sexual violence and domestic violence, which has long been called for. The goal is for victims to “have confidence in the justice system”.
Quebec Justice Minister Simon Jolin-Barrette says that going to testify in court should not make victims fear reliving their story. "It has to be adapted to facilitate their testimony," he says.

In September, Jolin-Barrette will introduce a bill to implement pilot projects that will lay the foundations for a permanent specialized tribunal, which will be deployed "throughout Quebec," he said. More information on the pilot projects, such as their number and where they will be implemented, will be communicated in the fall.

"It's a culture shift in the justice system. To bring about this change, we must make sure [...] that everything is well put together and attached, that it works well. What I do not want is for a victim not to be satisfied with the process," explains the minister.

Long-standing demand
​
The idea of establishing a specialized court for sexual and domestic violence has been frequently proposed in recent years. In Parliament, PQ MP Véronique Hivon has been calling for such a body since 2018.
"I felt that this was the reform that had to be done so that we could finally rebuild trust and show victims, concretely and symbolically, that the justice system is able to adapt when it sees the flaws and [breakdowns] of trust that have been created over time," she said Thursday, praising the cross-partisan work that has been done on the issue.

Last December, an expert committee on supporting victims of sexual assault and domestic violence, which included MPs from all parties, submitted to the government a voluminous report of 190 recommendations, including a key measure: the creation of a specialized court.

In their report, the co-chairs, Élizabeth Corte and Julie Desrosiers, stated that the establishment of such a tribunal at the Court of Quebec would "restore the confidence of victims in the criminal justice system." They also write that the essential elements of this tribunal must be "a provincial deployment, adapted physical facilities, specialized and trained legal actors, a vertical prosecution service and integrated support services," among others.

"All victims have the same rights"
Québec then mandated a working group, composed of the Departments of Justice, Public Security and Health and Social Services, the Director of Criminal and Penal Prosecutions, the Commission des services juridiques, the Court of Québec and the Secretariats for the Status of Women and Aboriginal Affairs, to "evaluate and determine concretely the elements necessary for the establishment of a tribunal specializing in sexual and domestic violence".

"It has to be really applicable throughout Quebec and not just in large centres where there are more resources, such as Montreal. All victims [have] the same rights and [must have] the same remedies," Louise Riendeau, of the Regroupement des maisons pour femmes victimes de violence conjugale, said Thursday.

"What is very good news is that the minister is deciding to move forward with pilot projects. [...] We want to be sure that the specialized court will be well oriented and will meet our objectives. The goal is to give confidence to victims [and to get there], the court must aim to ensure their safety and hold offenders accountable," she added.

The creation of pilot projects to provide Quebec with this new court is also part of a wave of alleged femicide that has shaken the province in recent months. Last spring, the Legault government released nearly $223 million more over five years to combat domestic violence, including $90 million for women's shelters.

Over the summer, actress Lily Thibeault, who testified in the documentary The Perfect Victim,also launched
a petition to urge Quebec to create a specialized court.