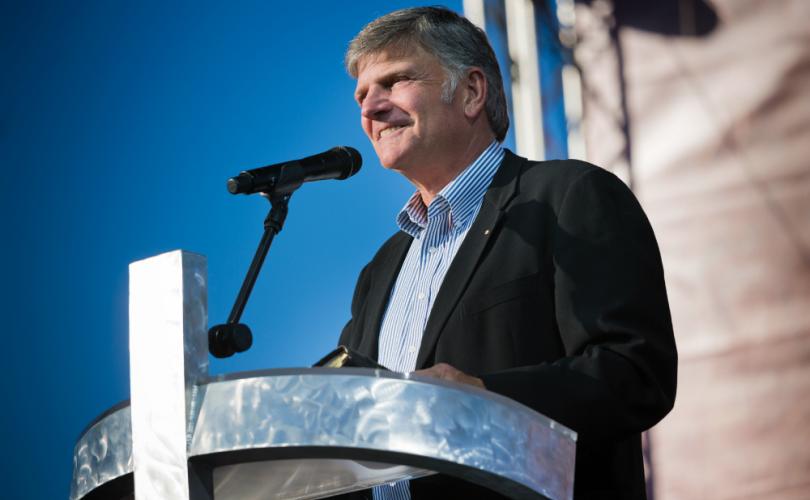 "It is said by some," Graham wrote after the cancellation of his event, "that I come to the UK to bring hate speech to your community.
That is simply not true.

LIVERPOOL, England, January 28, 2020 (LifeSiteNews  ) - A famous American evangelist has responded to the cancellation
of his appearance with an evangelical message.

Reverend Franklin Graham, who was scheduled to appear at ACC Liverpool Stadium on June 12 this year,
posted the following statement on social media yesterday:
A letter to the LGBTQ community in the UK -

Some say I come to the UK to bring hate speech to your community. That is simply not true. I come to share the gospel, which is the Good News that God loves the people of the United Kingdom and that Jesus Christ
came to this earth to save us from our sins.

The problem, I think, comes from whether God defines homosexuality as a sin. The answer is yes. But God goes even further than that, to say that we are all sinners - myself included. The Bible says that every human being is guilty of sin and needs forgiveness and purification.
The penalty of sin is spiritual death - the separation of God for eternity.

That's why Jesus Christ came. He became sinful for us. He did not come to condemn the world, he came to save the world by giving his life on the cross in sacrifice for our sins. And if we want to accept him by faith and turn us away from our sins,
he will forgive us and give us a new life - eternal life - in him.

My message to all is that they can be forgiven and have a good relationship with God. That's good news. It is the hope that people from every continent of the world are looking for. In the United Kingdom and the United States, we have religious freedom and freedom of expression. I don't come to the UK to speak against anyone, I come to speak on behalf of everyone. The gospel is inclusive. I don't come out of hate, I come out oflove. I invite  all members of the LGBTQ community to come and listen for yourself to the evangelical messages I will bring from the Word of God, the Bible.
You are absolutely welcome.

Graham, 67, the son of internationally renowned preacher Billy Graham, had planned a tour of eight UK cities. However, her intention to run at the ACC Liverpool stadium was thwarted after a group called the Liverpool LGBT Labour Network [Party] circulated a petition against his  "platform"and sent it to Liverpool City Council. The group objected to Graham's religious beliefs about homosexuality and said he feared that his appearance  would
"incite  hate mobilizationand jeopardize the safety of our LGBTQ community."

The petition had gathered less than 500 signatures at the time of this article's publication. He caught the attention of the Liverpool  Echo  newspaper, which also cited the letter from the Liverpool  Region  Pride  Foundation to Liverpool City Council,
Liverpool Mayor Joe Anderson and THE CEO of THE Liverpool
ACC:Graham is well known for his frank views on the LGBT
community, including promoting hatred of LGBT people as more important than education and openly supporting therapy conversion [sic] and vicious attacks on our community in Russia among many other poisonous opinions.

"Over the past few days, we have been informed of a number of statements that we consider to be inconsistent with our values," the press release said.

"In light of this, we can no longer reconcile the balance between freedom of expression and the divisive impact that this event has in our city. We have informed the event organizers that the booking will no longer be executed," he continued.

"We are proud to represent all communities and will continue to move forward with our goal as a company to promote profile, major events and economic impact for the Liverpoolarea."

This is not the first time Franklin Graham has encountered the wrath of Britain's "culture of cancellation." In 2018, more than 6,000  Britons,  including some MPs, signed a petition banning the evangelical preacher from entering the UK. They dubbed the Christian missionary a  "Hate  Preacher." Advertisements for Graham's "Festival  of Hope" have been banned. Nevertheless, on 22 September of the same year, Graham appeared in the English seaside town of  Blackpool , where he preached to a crowd of more than 2,000 people.
up