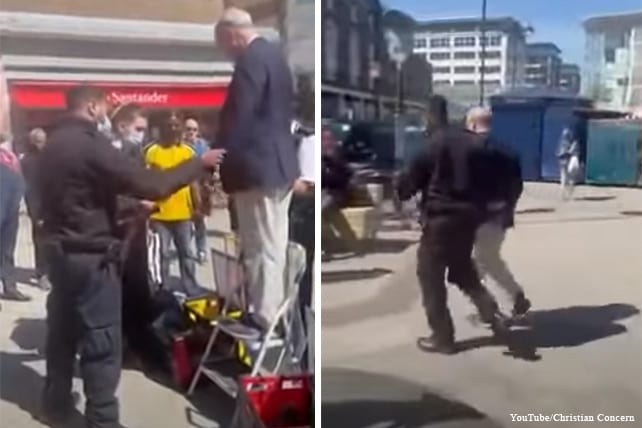 Pastor John Sherwood was arrested last week for preaching from the end of Genesis as he explained the biblical definition of marriage in a nopen area near Uxbridge Underground Station. Sherwood was forcefully removed by police from his platform for being accused of making “homophobic statements” and arrested under the Public Order Act because they said he used ‘abusive or insulting words.’Sherwood was released within 24 hours without any charges, and UK’s Daily Mail reports testimony he gave since the arrest saying, “I wasn’t making any homophobic comments. I was just defining marriage as a relationship between a man and a woman. I was only saying what the Bible says. I wasn’t wanting to hurt anyone or cause offense.”

Sherwood affirmed, “I was doing what my job description says which is to preach the gospel in open air as well as in a church building.”

He explained to the police that he was “exercising my religious liberty and my conscience.” He then confirmed the reports of being roughed up and said he has some injuries to his wrist and elbow after police forcefully removed the 71-year-old pastor from the area. “I do believe I was treated shamefully. It should never have happened,” he said.

The incident has been sent to the Crown Prosecution Service for further review.
A pastor was roughed up and handcuffed on Friday, April 23, 2021, as he preached about biblical marriage outside of Uxbridge Underground Station in the UK. John Sherwood, the minister of a north London church, and Peter Simpson of the Penn Free Methodist Church publicly read Genesis 1 about biblical marriage. Sherwood was arrested for his preaching.

After reciting the end of Genesis, Sherwood expounded upon what he had just read, telling everyone in hearing distance that “God’s design in creating mankind was to set human beings in families, headed by a father and a mother, not by two fathers or by two mothers. The distinction within mankind of just two genders, male and female, made in the image of God, constitutes the essence of God’s created order.”

Shortly after Sherwood’s explanation of God’s design for marriage and gender, police arrived on the scene and told the pastor they had received multiple complaints of ‘alarm and distress’ about his preaching. Simpson recalled that Sherwood politely but boldly reaffirmed his belief in what he was preaching to the officers.

Police officers warned the pastors that they should avoid making any “homophobic statements” while Simpson told the officers that “to uphold God’s moral law and to speak about the dangers of sin in respect of LGBT issues implies absolutely no hatred or unpleasantness towards any individual or group of people. Indeed, it is an act of love to one’s neighbor. Nevertheless, the Bible’s description
of homosexuality as sinful is plain and clear-cut.”

The police argued that public places are not areas where “homophobic statements” should be made because they offend people Simpson displeased the officers when he referred to the PRIDE parade taking place in Uxbridge that Bible-believers would find offensive and explained that there is no law against people being offended.

Eventually Sherwood resumed preaching and ignoring the police officers’ unlawful warnings. Simpson described that a lesbian bystander shouted at the street preacher, accusing him of hate speech. The officers then approached Sherwood and said he was under arrest.

The pastor who is in his early 70’s refused to come down from his step stool he was preaching from; he told the officers that no crime had been committed. Three officers then forcefully pulled him down from his platform, took his Bible from his hands, and placed handcuffs on the unwilling street preacher while leading him away.

Onlookers took video of the incident while one of the helpers from his church yelled out, “What has happened
to us as a nation that a man can no longer preach from the Bible?”

Sherwood was placed in jail overnight and released the next day. He remains under investigation for simply reciting and preaching God’s Word, which UK police say caused alarm and distress to others.

Simpson said the arrest “reveals a dangerous assault upon freedom of speech and, not least, upon the freedom of Christian pastors to declare in public all that the Bible teaches” and that the State cannot decide which parts of the Bible are “no-go areas.”

The video of the arrest can be seen here.

This Is Hate Speech?

A similar incident that didn’t involve police or any arrests happened in Sandy, Oregon, earlier this year when a church held a rally called “Prayer, Faith & Freedom Rally to Celebrate the Natural Heterosexual Family.” The rally involved protesters calling the church’s biblical preaching as “hate speech.” One person told an interviewer “when I see Christians out here saying, spouting, like hate messages, like, ‘You’re not natural if you’re gay,’ it’s really hurtful and I just hope that we can teach our youth that, you know, Jesus loves you no matter who you are.” Although both sides remained peaceful, it shows the tension Christians need to be prepared for when choosing to remain faithful to God’s Word and not conforming to the world’s ways.
ChurchLeaders.com
BY Jesse T. Jackson
https://churchleaders.com/news/395884-pastor-arrested-for-street-preaching-on-biblical-marriage.html
up