RETURN
While at first glance the rhetoric seemed aimed at Eastern European nations, dictatorships, and developing countries that have resisted the colonization of LGBT ideology, U.S. activists appear poised to use the Summit’s messaging as a means of shoring
​up support for Congress’ so-called Equality Act. 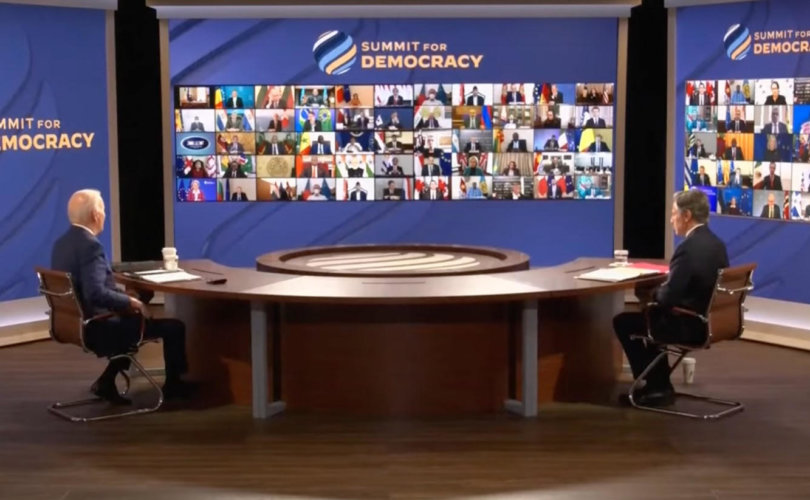 WASHINGTON, D.C. (LifeSiteNews) – President Joe Biden hosted a global Summit for Democracy that equated anti-corruption efforts and fortifying democracies around the world with the promotion of greater LGBT influence.

The two-day virtual summit brought together leaders from more than 100 countries to, ostensibly, “set forth an affirmative agenda for democratic renewal and to tackle the greatest threats faced by democracies today through collective action.”

One of the greatest threats to democracy identified by some participants – and backed up by the U.S. Department of State – is insufficient gay and transgender acceptance and clout.

The Summit focused, in part, on “promoting the human rights of LGBTQI+ people as a cornerstone of our commitment to democracy.”

A panel discussion described as a side event was composed of LGBT government officials and activists, including homosexual U.S. Transportation Secretary Pete Buttigieg, and was moderated by Jessica Stern, the U.S. Special Envoy to Advance the Human Rights of LGBTQI+.

Buttigieg warned that democracies don’t automatically create equality and that the “places where democracy seems to be in retreat are those where LGBTQI+ equality seems to be the most fragile.”

“Recognizing and protecting the human rights and dignity of LGBTQI+ people builds healthy and secure nations for all,” he opined.

The U.S. government has pledged up to $5 million to launch GLIDE under the Global Equality Fund, a public-private partnership founded in 2011, supported by 17 nations plus U.S. LGBT lobbying powerhouse the Human Rights Campaign, Out Leadership, Deloitte LLP, Royal Bank of Canada, Hilton, Bloomberg LP, and the Thomson Reuters Foundation Trustlaw Initiative.

While at first glance the rhetoric of the panel seemed aimed at Eastern European nations, dictatorships, and developing countries that have resisted the colonization of LGBT ideology, activists in the U.S. appear poised to use the Summit’s messaging as means of shoring up support for Congress’ so-called Equality Act, which would write transgenderism into federal civil rights law, compel medical professionals to commit abortions and transgender surgeries, and expand taxpayer-funded abortion on demand.

The measure passed narrowly in the U.S. House of Representatives in February but has yet to be taken up by the Senate.

“Should this bill become law, the well-being of our children, the role of parents, the privacy and safety of vulnerable women, the competitive edge of female athletes, the livelihoods of charities and businesses, and the integrity of our healthcare system will all be jeopardized,” Republican Rep. Vicky Hartzler of Missouri said at the time. “And that is just the tip of the iceberg.”

A Washington Blade commentary published after the Summit for Democracy,  headlined “LGBTQI+ equality is central to health of our democracy,” claimed that the U.S. is in critical need of improvement when it comes to the rights of LGBTQI+ people.

Gruberg and Bromley said that the U.S. is in the midst of a “crisis in democracy” impacting the basic rights of LGBTQI+ Americans, and that the country will be “closer to realizing its founding ideals by passing the Equality Act.”

The duo further suggested that affirming a child’s biological sex rather than an imagined gender is dangerous
and represents a grave threat to democracy:

“[T]his year marked the most anti-LGBTQI+ state legislative session in history, with transphobic attacks lodged at our most vulnerable community members: our children. From blocking access to necessary medical care, to prohibiting transgender kids from joining school sports teams, to erasing all mention of the existence of LGBTQI+ people from textbooks, more than 100 bills targeting transgender people were introduced in state legislatures last session. And school districts across the country are racing to pull LGBTQI+ -themed books and authors from library shelves. These attacks against the basic rights and dignity of LGBTQI+ people,
and transgender people, in particular, have devastating consequences

All of this hand-wringing comes despite the fact that gays and lesbians can now “marry” same-sex partners; the Supreme Court has ruled that sexual orientation” and “gender identity” are protected under the 1964 Civil Rights Act; gender confused boys and men are increasingly participating in and winning top honors in girls’ and women’s sports competitions; 767 major U.S. corporations scored 100% in HRC’s “Best Place to Work for LGBTQ Equality” report for 2021; and homosexuals are hugely over-represented in film and TV,
including many children’s shows.
Doug Mainware
LIFE SITE
https://www-lifesitenews-com.translate.goog/news/bidens-summit-for-democracy-equates-stronger-govts-with-of-greater-lgbt-influence/?_x_tr_sl=auto&_x_tr_tl=fr&_x_tr_hl=fr&_x_tr_pto=op
UP