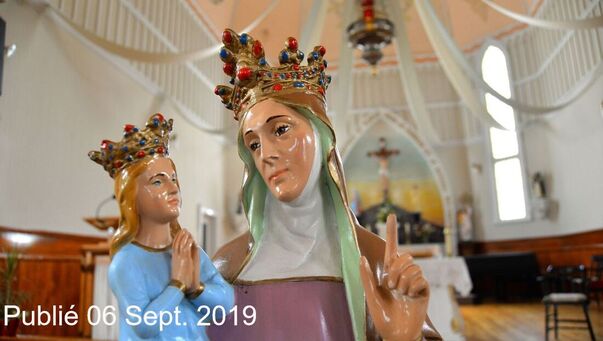 Back to school is approaching. Minister of Education Roberge has promised to review the course content in its entirety
RCT (Ethics and Religious Culture), particularly with respect to its "religion" component.

We lamented the stereotypes conveyed in the students' notebooks, but the catechetical presentation is also deplorable. I will give only one example: the Immaculate Conception. A question in the homework book asks the student, "How do you think the Virgin responded by learning that she is the mother of God? This presumption is presented as a truth, as in the 1940s! When it comes to talking about the "religion" component to students,
it should be presented in the form of history lessons and with a critical mind.
At the beginning of the course, there should be no religious education.

I therefore suggest removing the content that concerns the dogmas of religions and replace it with courses
in citizenship and secularism, in all logic with the new law 21.

Some designers of the ECR program say that religions must be respected. We must certainly respect people, believers, but we must denounce religions and their abuses. Unfortunately, the ECR course seems designed so that young people do not criticize, which is contrary to the scientific spirit, philosophy and history, which are nevertheless the basis of the mission of school and university institutions.

Such a change in this program would certainly be better than the current ECR course, which still today presents the catechism of religions as being "true". Religions have been and still are today a source of divisions and wars between people and where,
among other things, the equality of men and women does not exist.

By teaching these myths from another time, the designers of the ECR program cling to the past. Instead, think of an ethics course focused on the present and the future with the conviction that the current generation could do better to beautify and improve the world!
New paths must be explored for personal and collective growth.

Philosophy forums, the basis of reflection, should be made at school from the secondary level. It would be desirable to implement them even in primary school. This would introduce our young people to reflect on the major issues of society.

If the "practitioners of religion" knew the true story of its foundation and its maintenance through the centuries, I think many of them would withdraw and some would become agnostic. I believe it is this ignorance that allows religions to survive. The human being seems inhabited by a deep religious feeling, instilled by parents and by education. I am inclined to think that society has not yet reached adulthood, because it refuses to question its beliefs and refuses to refer to history and historians. Unfortunately, the routine of daily life does not give time to
"think" where the importance of doing it in school.

In RND's January 2003 review, its director, Mr Chabot, writes: "We know how early on Catholicism rejected modernity and that, thereafter, there was no clear reconciliation". Based on the assertion that "religions are based on some first intuitions they call revelation", Mr. Chabot makes the following observation: religions are "traditions and they tend to perpetuate the past" and he questions: "Would religion be irreconcilable with the idea of ​​evolution, which is the engine of modern progress? " If so, she has no place in school, let alone at university.
up
Thank you for your visit