return
The Philadelphia teacher fretted that parents' ability to look in on their kids' classes will make it harder to 'encourage vulnerability' and will 'damage' 'honest conversations' with students. 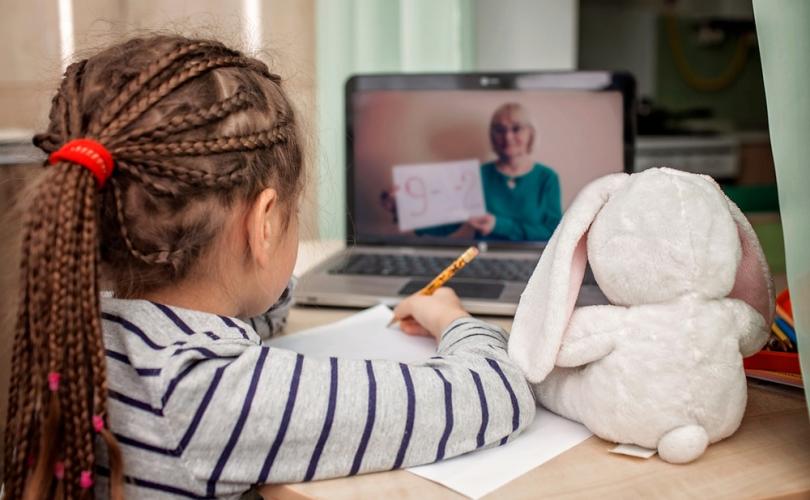 PHILADELPHIA, August 11, 2020 (LifeSiteNews) — A teacher within the school district of Philadelphia is lamenting the increased chance of parental oversight if classes are taught online amid the coronavirus crisis — especially when it comes to so-called sex education.

“I am most intrigued by the damage that ‘helicopter/snowplow’ parents can do in honest conversations
about gender/sexuality,” the teacher said.

The teacher, Matthew R. Kay, works for Philadelphia’s Science Leadership Academy. In 2018, he published his book Not Light, but Fire: How to Lead Meaningful Race Conversations in the Classroom.

While his tweets are private, one Twitter user posted a screenshot of his thread of complaints.

“So, this fall, virtual class discussions will have many potential spectators — parents, siblings, etc. — in the same room,” Kay began. “We’ll never be quite sure who is overhearing the discourse. What does this do for our equity/inclusion work?”

“How much have students depended on the (somewhat) secure barriers of our physical classrooms to encourage vulnerability? How many of us have installed some version of ‘what happens here stays here’ to help this?”

Kay then went on to mention “honest conversations about gender/sexuality” as an issue where parents who are involved in their children’s education would be unhelpful.

Kay admitted that “‘conservative’ parents are my chief concern” but said “that the damage can come from the left too. If we are engaged in the messy work of destabilizing a kids [sic] racism or homophobia or transphobia — how much do we want their classmates’ parents piling on?” 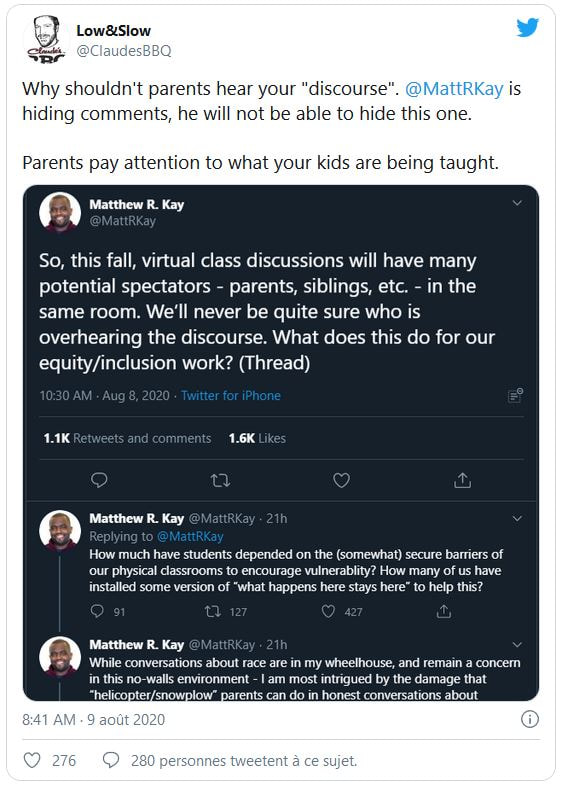 The Family Research Council (FRC) in May released a publication on “Sex Education in Public Schools” outlining how “sex ed programs push the limits on what is appropriate, both in terms of the material presented to students and the age at which it is presented.” Often, parents are unaware that these things are happening at school.

According to the publication, “[p]arents have two main concerns about sex ed to-day: That it sexualizes children and that it is load-ed with LGBTQ indoctrination.”

“Even if parents identify problematic lessons in sex ed and manage to opt their kids out, that won’t protect them from sex propaganda elsewhere in school, sometimes where they least expect it,” Cathy Ruse, the author of the publication, pointed out.

Sometimes, parents are intentionally deceived about what their children are taught at school. Parents in Fairfax County, Virginia are told that an abstinence lesson will talk about “the benefits of abstaining from sexual activity until marriage.” However, as Ruse found out, “the word ‘marriage’ never appears anywhere in the lesson!”

“Schools in Indiana actually send teens shopping for condoms, with a worksheet to fill out comparing brands, prices, lubrication, and whether or not they are comfortable shopping in the store.”

Additionally, the term “consent” is no longer used exclusively “to equip kids to resist committing, or being a victim of, sexual assault.” Rather, “[t]he ‘consent’ movement seems less about avoiding assault and more about promoting sex and sexual rights.”

Sex education is sometimes used to promote abortion, with children being encouraged to keep even the killing of a baby secret from their parents.

“In California, schools have partnered with Planned Parenthood and the American Civil Liberties Union to instruct students on how to get secret abortions without telling their parents, according to a video released by the California organization Our Watch.”
up