The revision of the law blocked in the Senate 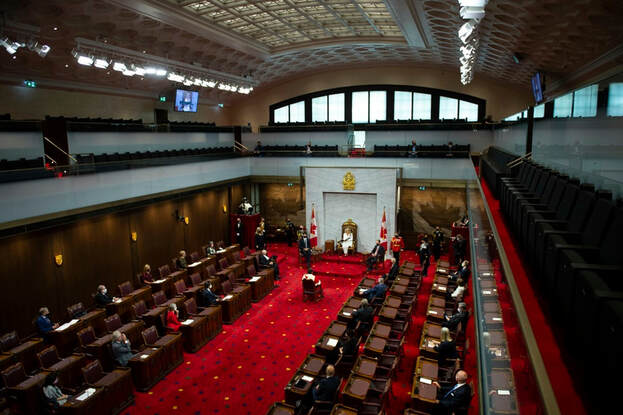 The parliamentary review of the federal law on medical assistance in dying was supposed to begin last June, but the process never materialized.
(Ottawa) Conservative senators are blocking the start of the federal medical assistance in dying law review process. This is a special committee whose work is long overdue and subject to a court order.
The political parties represented in the House of Commons have identified ten deputies to sit on the special committee responsible in particular for determining whether the new version of the law should include minors considered mature and the right to advance requests.

Four senators were also chosen by three of the four groups represented in the Senate.

But everyone is waiting for the Conservative Senate caucus to nominate their representative, which has still not been done despite the passage of a unanimous motion demanding that all appointments be announced before last Friday.

The office of Conservative Senate caucus leader Don Plett did not respond to our requests for comment on the blockage.

Senator Pierre Dalphond, a former judge representing the Progressive Senators Group, says Don Plett refuses to appoint his representative until he is assured that this person will be assured of the co-chair of the committee. Insurance that other groups are not prepared to give.

"He wants a blank check, which I am not prepared to give," said Dalphond in a telephone interview.

“There are so many things to do and we talk about serious issues, then they prevent senators and MPs who want to work from doing it. A man's ego prevents the system from working, which strikes me as very close to contempt of parliament, ”he continued.

The parliamentary review of the federal law on medical assistance in dying was supposed to begin last June, but the process never materialized.

Last month, the House of Commons and the Senate passed Bill C-7 to provide access to medical assistance in dying for people suffering from excruciating illnesses but whose natural death is not imminent. An amendment related
to a decision of the Superior Court of Quebec rendered in 2019.

Under pressure from senators, the bill was amended to specify that a cross-party committee must undertake the famous long-awaited revision within 30 days of the adoption of the said law.

This 30-day period ended last week and the Conservative caucus still had not named its representative.

What makes Pierre Dalphond say that his colleague Don Plett shows "a total lack of respect" for the Senate, the House of Commons and the law which requires the beginning of work as quickly as possible.

"It is to take the Senate hostage, the House of Commons hostage," he describes.

The Conservatives, with 20 senators, are the last fully partisan group in the Senate. For Pierre Dalphond, this blackmail can only be explained by the fact that a Liberal MP must co-chair the committee.

According to him, they do not accept the fact that the other members of the committee are non-partisan and therefore that they cannot impose on them the choice of a co-chair. These members will vote independently for the person they want to see as co-chair.
THE CANADIAN PRESS
https://www.lapresse.ca/actualites/politique/2021-04-27/aide-medicale-a-mourir/la-revision-de-la-loi-bloquee-au-senat.php
up