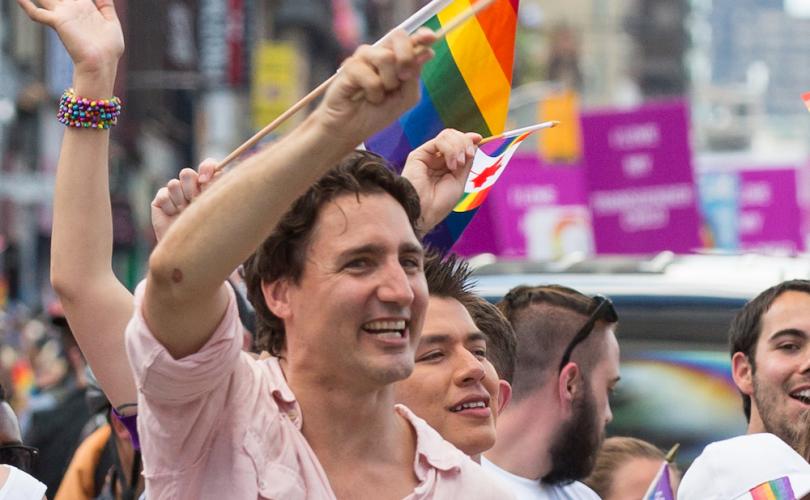 OTTAWA, December 17, 2019 (LifeSiteNews) — A bill that will criminalize “conversion therapy” in Canada is a “despicable” attack on religious liberty that could lead to Christians going to jail for proclaiming that homosexual individuals can change, warns Canada’s pro-life, pro-family organization Campaign Life Coalition.
Introduced last week by Independent Senator Serge Joyal, Bill S-202 will make it an indictable offense punishable by up to five years in jail to benefit materially or financially indirectly or directly from the provision of “conversion therapy” to anyone under 18 years of age.

The bill further amends the Criminal Code to make advertising “conversion therapy” a crime punishable by up to five years in jail.
Not only that, but Prime Minister Justin Trudeau’s Liberal government plans to introduce a similar bill in
the House of Commons when Parliament reconvenes in January.

In his mandate letters to ministers setting out the Liberals’ legislative objectives, Trudeau instructed justice minister David Lametti to “amend the Criminal Code to ban the practice of conversion therapy and take other steps required with the provinces
and territories to end conversion therapy in Canada.”

Bill S-202 defines “conversion therapy” as “any practice, treatment or service designed to change an individual’s sexual orientation or gender identity or to eliminate or reduce sexual attraction or sexual behaviour between persons of the same sex. For greater certainty, this definition does not include a surgical sex change or any related service.”
This sweeping definition includes “Christian counselling, prayer, and evangelism directed at the LGBT community” as well as “medical or psychological practices,” Cooke said.
“In other words, if you publicly proclaim (‘advertise’) the message that homosexuals can be saved and changed, you will go to prison,” he added.
“And if a young homosexual (under age 18) is converted at your church and starts contributing to the offering (providing a financial ‘benefit’), your church leadership will go to prison.”
“Christians could actually become criminalized for just being Christian. The Canadian government intends to make conversion efforts illegal if they are in any way directed at those who identify as LGBT,” he warned.

Campaign Life has launched a petition against the bill, stating it is “absurd and totalitarian for any government” to jail people for “helping someone overcome unwanted same-sex attractions or gender dysphoria,” as well as “a violation of the fundamental human rights of those who want to change.”
A problem in opposing this law is that the “LGBT lobby and its political allies” are using the public’s misperception of conversion therapy as leverage to pass it, Cooke noted.

Some 50 years ago, a “small number of doctors” used “very questionable psychological techniques” such as “electroshock therapy or vomit-inducing chemicals to create a mental aversion to homosexual impulses,” he noted.
“These were heinous, non-Christian practices that have been rightfully discontinued — and we heartily denounce them.”
That’s echoed by Jack Fonseca, director of political operations at Campaign Life.
“The mainstream media has been flat out lying about conversion therapy” in the past few years to “whip up the public to support a ban on this important treatment option that many people want and should have available if they desire it,” he told LifeSiteNews.
The fear-mongering by liberal journalists “about forcible electroshock therapy on homosexuals is total rubbish. It does not happen at all. And it probably has not happened for half a century,” Fonseca said.
What the “caring professionals in the field of psychology and psychiatry” use today to overcome unwanted same-sex attraction “is simply standard, clinical ‘talk therapy’, in which patients who want help talk to a counsellor or therapist about the significant moments in their life, especially childhood trauma which may be contributing to the unwanted homosexual or transgender feelings,” he said.
This process, which is also referred to as “reparative therapy,” is “very effective,” added Fonseca.
Pioneer and foremost authority on reparative therapy Dr. Joseph Nicolosi “consistently found” that a third of his same-sex attracted patients “recovered their heterosexual nature and were able to move on to get married to a person of the opposite sex and to have a family,” he said.
Another third “made significant progress but still struggled with same-sex attraction,” while “one-third experienced no change,” Fonseca noted. “In terms of efficacy in comparison to other forms of the psychiatric or counselling treatments, this is actually a very good success ratio.”
Cooke noted that Kristopher Wells, Canada research chair for the public understanding of sexual and gender minority youth at Edmonton’s MacEwan University, and adviser to the government on the conversion therapy ban, was clear that churches are under threat over conversion therapy.
Wells told a roundtable in Edmonton in August that Lametti was considering “revoking charitable status,” of “churches [and] faith communities that continue to use or promote conversion therapy,” Global News reported at that time.

Openly homosexual M.P. Randy Boissonnault, special adviser to Trudeau on LGBT issues, told the same roundtable Lametti is committed to the cause.
“The reason you criminalize conversion therapy is so that we stamp it out… so that people know that if you’re trying to change somebody’s sexual orientation, gender identity or gender expression, you’re breaking the law and you should go to jail,” Boissenault said.
Fonseca blasted criminalizing of reparative therapy as a violation of religious freedom and parental rights.
Individuals have the right to seek help for unwanted same-sex attraction, and parents have the right and obligation “to seek out a psychotherapist who can get to the bottom of the underlying psychological or emotional problem (or sexual abuse as is often the case)
” for a child suffering gender dysphoria, he said.
“For Trudeau to insert himself between a parent and their child in this manner is despicable and disgusting,” he added.
Campaign Life is urging all Canadians to contact their M.P.s and their senators to oppose Bill S-202, and to sign CLC’s petition,
which Campaign Life will be presenting to the Senate and Trudeau government, Fonseca told LifeSiteNews.

He also asked concerned Canadians to talk to their priest or pastor and “urge them to speak out against this law,
and to promote our petition in their church.”
up