Trump at 2020 March for Life:
‘Unborn children have never had a stronger defender in White House’

return
Mothers are heroes,' and pro-lifers 'just make it your life’s mission to help spread God’s grace,' he said. 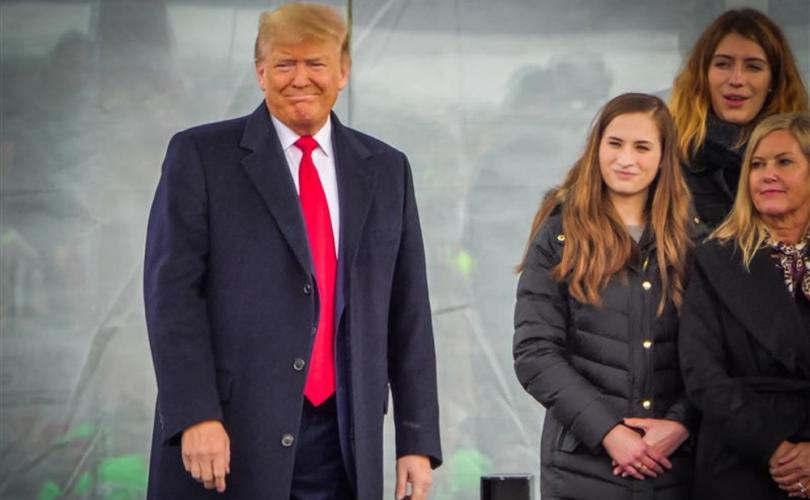 WASHINGTON, D.C., January 24, 2020 (LifeSiteNews) – Donald Trump made history Friday by becoming the first sitting president to address the March for Life in person, telling hundreds of thousands of pro-lifers he was “proud to stand with you” to “protect the right of every child, born and unborn,
to fulfill their God-given potential.”

“Young people are the heart of the march for life and it’s your generation that’s making America the pro-family, pro-life nation,” the president said, thanking students for making the trip and pro-life activists for "embrac[ing] mothers with care and compassion.
You’re powered by prayer and motivated by pure, unselfish love."

“All of us here today understand an eternal truth: every child is a precious and sacred gift from God,” Trump said. “Together we must cherish and defend the sanctity and dignity of human life. When we hold a newborn in our arms, we know the boundless love a child brings to a family.”

Trump discussed the actions he has taken through his first term, and declared that "unborn children have never had a stronger defender in the White House." He said the pro-life movement was acutely affected by the Left’s war on religious liberty, but pledged his administration would continue to defend religious speech and faith-based organizations. "The far left is working to erase our God-given rights,
" he said. "They’re coming after me because I’m fighting for you."

“Together we are the voice for the voiceless,” he went on. “Democrats have embraced the most radical and extreme positions we’ve seen in decades” on the issue, citing Congressional Democrats’ support for late-term abortion and opposition to mandating medical care for newborns that survive abortions.

“To all the women here today, your devotion uplifts our entire nation and we thank you for that,” the president said. "To all of the moms here today, we celebrate you and we declare that mothers are heroes. Every person is worth protecting and we know that every human soul is divine and every human life born and unborn is made in the holy image of almighty God."

Pro-lifers “just make it your life’s mission to help spread God’s grace,” he added, with their efforts to provide aid to pregnant women and help children put up for adoption “find their forever home.”

"We cannot know what our citizens yet unborn will achieve," the president told the crowd. "But we know this: every life brings love
into this world, every child brings joy to a family. Every person is worth protecting."

Watch some reactions on the ground at the March for Life to President Trump's historic speech:
While presidents Ronald Reagan and George W. Bush expressed their support for the March for Life with phone messages, Trump became the first president to deliver live remarks (albeit remotely, from the White House) to the event in 2018.
Trump’s appearance is the latest demonstration of his support for the pro-life cause, and a reminder of how far the former celebrity businessman
has come since his conversion from conventional New York liberal to Republican political candidate.

Trump is considered by many veteran pro-life activists to be the most pro-life president in history.
As president, Trump has reinstated and expanded the ban on foreign aid to abortion-involved groups (including International Planned Parenthood Federation), banned groups that commit or refer abortions from Title X family planning funds, overturned Obama-era regulations that barred states from defunding Planned Parenthood, and issued rules protecting Americans from being forced
to subsidize abortion in government-mandated health insurance plans.

The president has also forcefully denounced abortion, calling attention to Democrats’ opposition to anti-infanticide legislation and calling
on Congress to send him a ban on late-term abortion to sign. Most of his judicial nominees have pleased pro-lifers, as well.

In addition, the administration has consistently worked to defend life and oppose abortion at the United Nations, from resisting pro-abortion agenda items and resolution language to affirming that abortion isn’t a human right and promoting abstinence education.

This year, Trump declared January 22, the anniversary of the 1973 Roe v. Wade decision imposing abortion on demand across the country,
to be “National Sanctity of Human Life Day.”

In a proclamation issued this week,  Trump declared that “every person — the born and unborn, the poor, the downcast, the disabled, the infirm, and the elderly — has inherent value” and said that the U.S. “proudly and strongly reaffirms our commitment to protect the precious gift of life at every stage, from conception to natural death.”

While President Trump addressed the March, his Vice President Mike Pence is meeting with Pope Francis at the Vatican, highlighting the administration’s alliance with the Catholic Church in matters of life and religious freedom.
up