return
By Calvin Freiburger
'My administration,' the president told the General Assembly, 'is advancing religious liberty, opportunity for women, the decriminalization of homosexuality, combatting human trafficking, and protecting unborn children.' 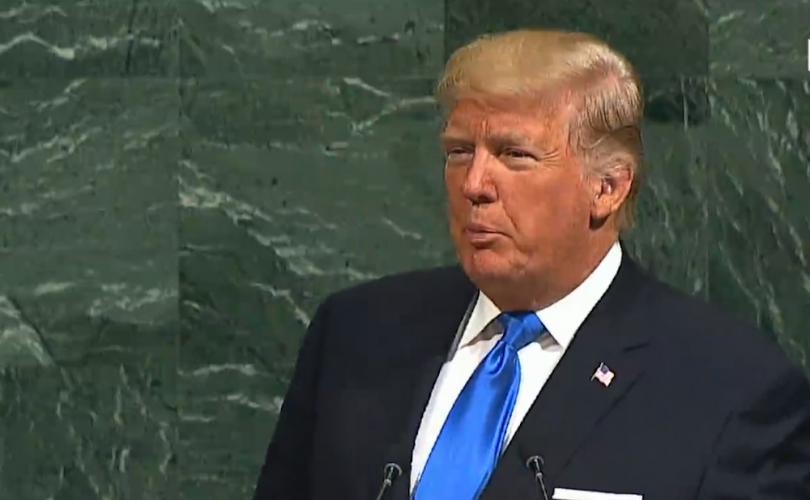 President Trump delivers an address to the United Nations.
WASHINGTON, D.C., September 22, 2020 (LifeSiteNews) — The United States is committed to recognizing and “protecting unborn children,” President Donald Trump reminded the United Nations on Tuesday in an address to the U.N. General Assembly.
“America will always be a leader in human rights,” Trump declared in a speech delivered from the White House, the National Catholic Register reported. “My administration is advancing religious liberty, opportunity for women, the decriminalization of homosexuality, combatting human trafficking, and protecting unborn children.”
The president further called on the international body to “focus on the real problems of the world,” such as “human and sex trafficking, religious persecution, and the ethnic cleansing of religious minorities.”

Trump’s comments are the latest volley in the abortion war of words between the United States and the U.N., which has repeatedly asserted a “right” to abortion.  Earlier this month, U.N. secretary-general António Guterres declared that the U.N. would “fight” governments such as the Trump administration, which have moved to “further restrict access to abortion” during the COVID-19 outbreak.
​
Beyond words, the Trump administration has taken concrete actions to combat abortion internationally, namely by not only reinstating, but expanding the Mexico City Policy, which bars America’s $8.8 billion in foreign aid from being distributed to entities that commit abortions. Last week, the administration proposed an additional rule that applies the policy to international
​contracts in addition to grants and cooperative agreements.
up