return
Faced with a vote whose outcome left no doubt, the Democrats are already on a war footing. 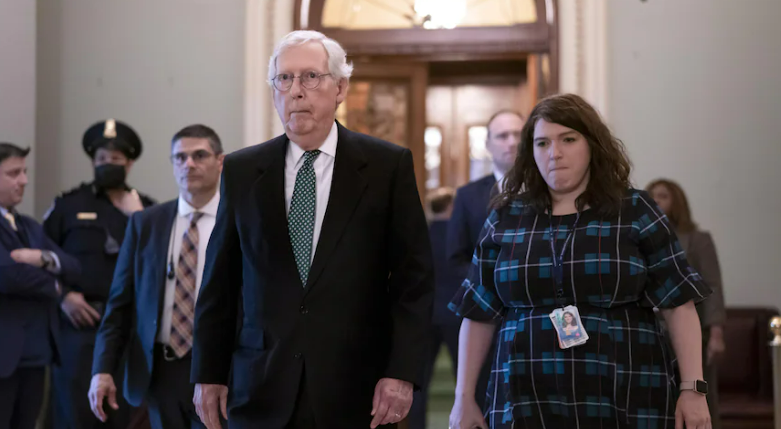 As expected, the Senate on Wednesday blocked a bill to legalize abortion a week after a leak that exposed the Supreme Court's opening to overturn the landmark Roe v. Wade, who recognized the constitutional right to abortion. The Democratic camp was quick to call on pro-choice voters to show their discontent in the midterm elections.

Senators closed the door on the Women's Health Protection Act by a vote of 51 to 49, with Democratic Senator Joe Manchin,
one of the most conservative in his party, joining the 50 Republicans.

It was in fact a procedural vote that would have paved the way for a subsequent vote on the bill if 60 elected officials had given their approval.

Republican Senators Susan Collins and Lisa Murkowski, who are pro-choice but who propose a project with a more modest scope, have remained in solidarity with their colleagues.

Last week, Collins explained her opposition to the Democrats' bill by the fact that it superseded other rights,
such as that of a Catholic hospital not to perform abortions.

The outcome of the vote was expected, but the goal was more to put Republicans on the spot while
the majority of Americans say they support abortion in all or most cases.

Every American will see which side each senator stands on, Democratic Senate Majority Leader Chuck Schumer said last week.

In the evening, President Joe Biden, quoted by Reuters, predicted at a donor event in Chicago, Illinois, that the turn the Supreme Court seems poised to make on abortion could be a prelude to the erosion of other rights.

« Remember what I am saying: they will attack the [...] Supreme Court decision on the right to same-sex marriage. »

In its brief filed with the Supreme Court regarding the challenge brought by Mississippi, whose anti-abortion law is at the center of the dispute, the Biden administration had argued that the eventual reversal of Roe v. Wade would threaten court precedents on other rights.

This is the second time this year that the Democratic camp has proposed to legislate on abortion. Last February, an almost identical bill that had been approved by the House of Representatives suffered the same fate in the Senate.

Electoral issueSoon after the vote, the elected Democrats also announced their intention to make this issue an electoral issue.

Deploring unprecedented attacks on women's constitutional rights, President Biden criticized Republicans in a statement, denouncing a vote that goes against the will of a majority of Americans.

To protect the right to choose, voters must elect more pro-choice senators in November and restore a pro-choice majority to the House. If they do, Congress can pass this bill in January and table it on my desk so I can sign it," he said.

The contrast between the parties is obvious, Schumer said after leaving the House. Elect more pro-choice Democrats if you want a woman to be able to have control over her own body, [...] if you want to protect women's freedom and right to choose.

— A quote from  Chuck Schumer, Democratic Majority Leader in the SenateDemocrats will never stop defending our fundamental freedoms. When they vote next November, the American people will remember those who sought to punish women and control their decisions and those who fought tirelessly alongside them,
House Speaker Nancy Pelosi said in a statement.

For their part, several Republicans have instead portrayed their opponents as a group with extremist positions.

I voted no to the radical Democratic bill that would legalize abortion until the moment of birth, tweeted Republican Senator Lindsey Graham, citing an argument often hammered by the Republican camp. It was a radical bill that goes far beyond Roe v. Wade, he said.

While a majority of Americans say they support abortion in all or most cases, Americans do not show
absolute support for abortion rights when polls offer more options.

Abortion has long been an issue that mobilizes Republican voters, particularly within the religious right,
which contributed to Donald Trump's victory in 2016.

Donald Trump had promised to appoint only conservative judges opposed to abortion. He was also able to appoint three magistrates, who came to anchor more to the right the highest court in the country.

A decision that would mark a major shiftLast Tuesday, the leak of a draft of the Supreme Court's decision indicated that the country's highest court appeared willing to overturn Roe v. Wade, who has been protecting abortion rights in the United States for 50 years.

The leak, published on the Politico website, sent shockwaves through the Democratic Party and the pro-choice camp but delighted abortion opponents and most Republican lawmakers.

The 1973 ruling has so far set a precedent in a country where the federal government does not offer a legislative framework on abortions.

The Court's decision is expected in late June or early July.

If this precedent is indeed reversed, the choice to allow, restrict or completely prohibit abortion will be up to states.

Twenty states, led by Republicans, are willing to ban or restrict it significantly. Thirteen of them have even already prepared a law that would come into force immediately or very quickly after a court decision going in the direction they hope.

In at least one of these states, Louisiana, some Republican elected officials want to go further
by allowing criminal prosecutions against women who have abortions.