'We Didn't Back Down':
​Christians Respond to Portland Antifa Attack With Massive Worship Rally 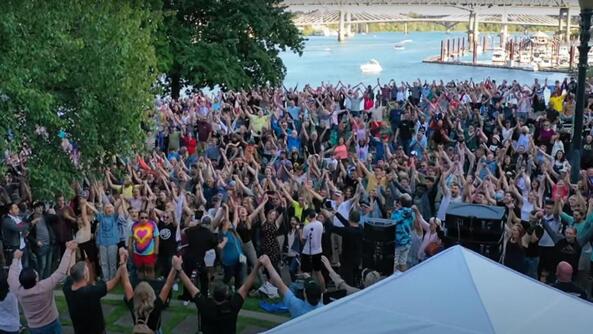 One day after a shocking and disturbing attack on a Christian prayer event in Portland, Oregon, Christians rallied in that very location for a massive gathering to sing and worship God.

Sean Feucht, best known for his work as a volunteer worship leader at Bethel Church, led the large gathering and even claimed one member of Antifa who came to disrupt, ended up getting saved. 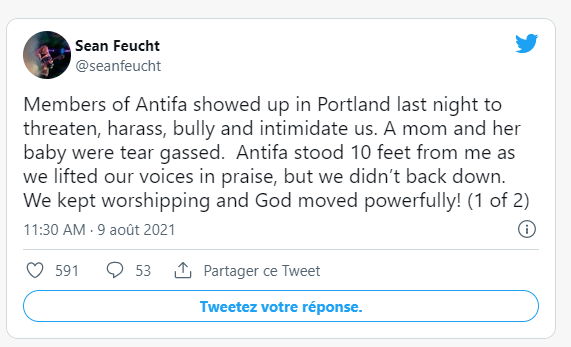 “Members of Antifa showed up in Portland last night to threaten, harass, bully and intimidate us,” he wrote on social media today. “A mom and her baby were tear-gassed. Antifa stood 10 feet from me as we lifted our voices in praise, but we didn’t back down. We kept worshipping and God moved powerfully!”
As it turns out, that worship ended up ringing true for at least one self-professed Antifa member, who gave his life to Christ.

“One member of Antifa who came to disrupt our service was SAVED giving his life to Jesus! It’s a time for a BOLD & BELIEVING church!” Feucht joyfully wrote. “God has not given us a Spirit of fear but of POWER & GRACE! The Church is on the move and the gates of hell will not prevail against it!”

Feucht wrote emphatically of the need to continue to proclaim the Gospel, arguing that “people are scared, addicted, lonely, suicidal and hopeless – AND WE HAVE THE HOPE OF THE WORLD INSIDE OF US!!”

“THIS IS WHY WE CAN’T BACK DOWN” he wrote in all caps. 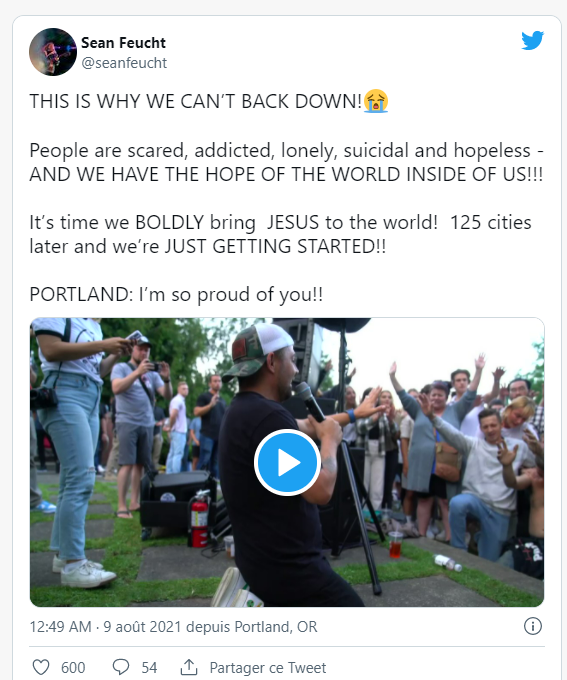 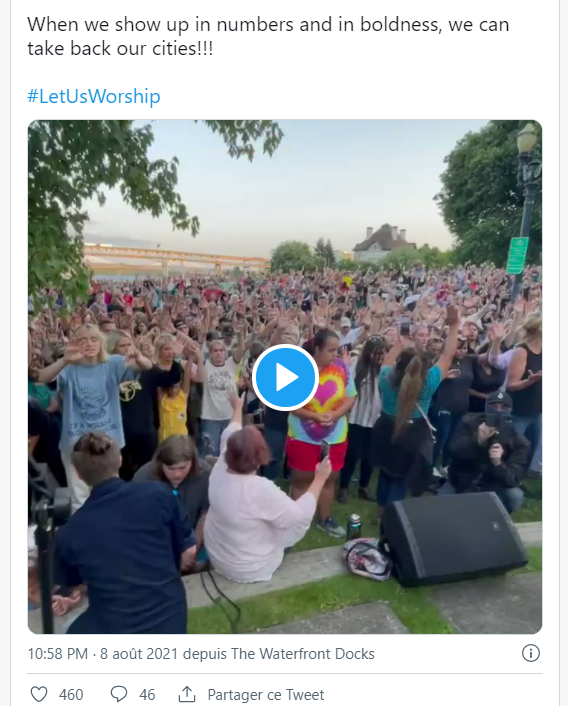 “So many were saved, healed, delivered and freed tonight!” he added, while warning not to listen to “the trolls” who criticize. “Don’t let ANYTHING hold YOU BACK from sharing the love of JESUS in this season! IT IS REVIVAL SEASON!” Feucht proclaimed.

All of this happened as Antifa threw needles, pills, drugs and more at the crowd. They also allegedly attacked Christians as they were exiting the event, according to frequent Antifa reporter Andy Ngô. 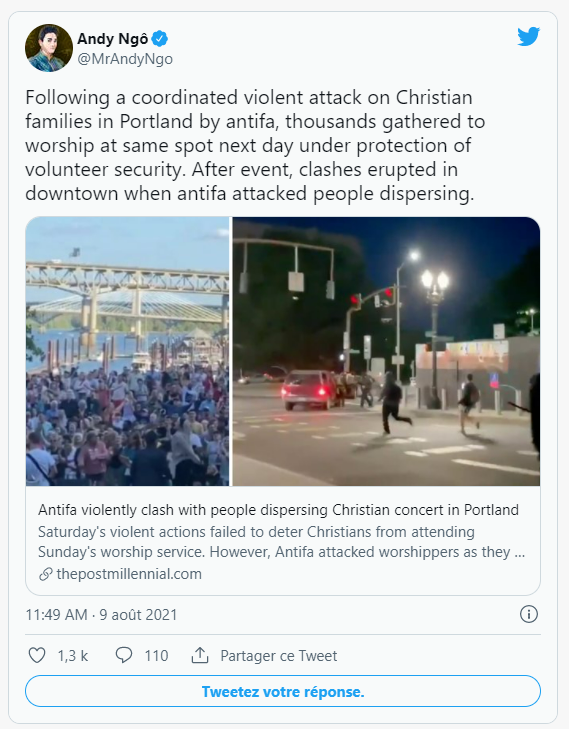 Feucht posted a recap of their response rally that drew hundreds, possibly over a thousand Christians to sing and praise God.
WHO DID ANTIFA ATTACK?

Shocking video from over the weekend showed Antifa members assaulting a group of Christians, including children, who were gathering in Portland, Oregon Saturday for a scheduled prayer event.

Journalist Andy Ngo shared video of the large group carrying shields and weapons as they yelled profanity at the worshippers. 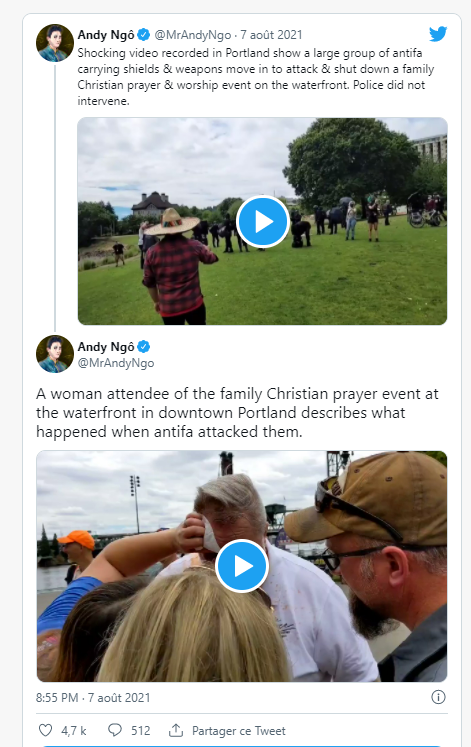 The Christians can be heard praying as the Antifa members became more aggressive and violent.

Here’s a clip of one brave young boy who was attacked by these thugs. 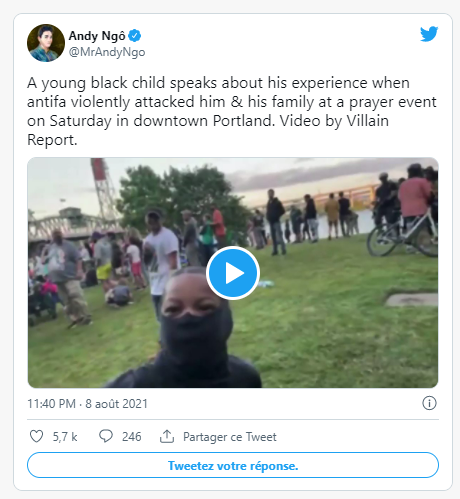 A woman attending the event described the group as “ruthless.”

“Antifa just rolled in like an angry mob, started throwing flash bombs at everybody, macing everybody … rotten eggs,” she said. “They threw a flash bomb into a group of kids that were out there from four months old to like 10.” 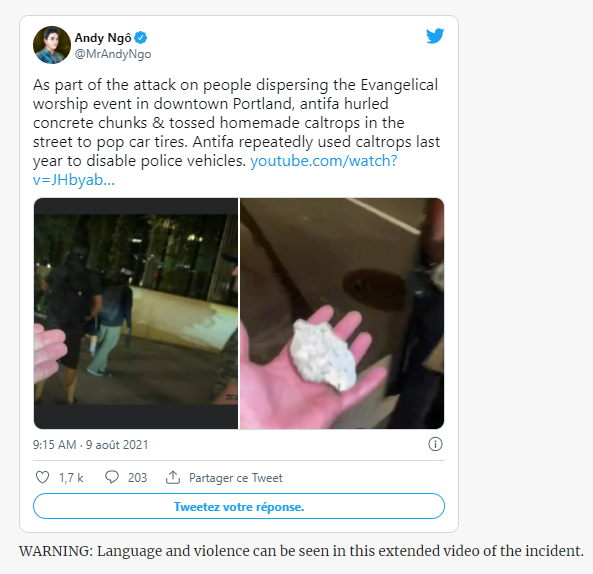 Another attendee helped Pastor Pawlowski, who was sprayed in the face with mace.

“Walked up to ask them to stop throwing things at the children,” the man explained. “There’s kids down there, I mean they’re toddlers and they sprayed me too.”

Pastor Pawlowski, who leads the Fortress of Adullam Church in Calgary, Canada, gained attention earlier this year for reportedly violating public health restrictions on in-person worship gatherings and chasing police out of his church property with shouts of “Nazi!” at them.
Antifa members also destroyed a sound system and other music equipment by throwing it into the Willamette River.

“Where is your god now?” can be heard amongst the chaos.

According to The Post Millennial, the Portland Police Department did not intervene during
the incident and would not interact with either group.