When a symbol of religious sexism becomes a fundamental right 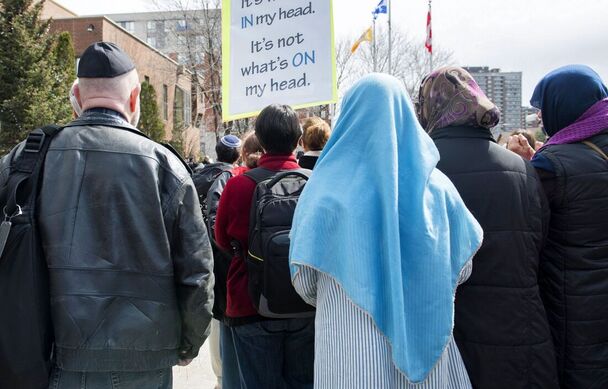 The Quebec Law on the Secularism of the State (Bill 21) was validated in good part by the judgment of the Superior Court of Quebec, to the great relief of its defenders fearing its invalidation by the Tribunal. However, the content of this judgment is disappointing in many ways.

From the start of the trial, it was clear that Judge Marc-André Blanchard was leaning in favor of the protesters of the law. In his 240-page judgment, he adopts their arguments that this law would violate the basic rights of minorities, particularly those of Muslim women. The law was therefore only validated thanks to the derogation clause, renewable every five years, which makes its future precarious.

The main point of contention surrounding this law is the inclusion of public elementary and secondary school teachers in the list of positions subject to the restriction of religious symbols. Everyone agrees that this restriction mainly affects Muslim women wearing the hijab.

As soon as it was adopted, the legal challenge to the law was brought, unsurprisingly, by three Muslim women wearing the hijab, supported by the National Council of Canadian Muslims and human rights organizations. Although the three complainants are not teachers but aspire to become one, they say they are aggrieved by the restrictions provided for by this law.

The legal armada and the resources deployed to support their point of view seem disproportionate given the very small number of people directly affected by this restriction. This is why certain analysts affirm that the main stake of the dispute is above all political and aims to limit the legislative power of Quebec in the fields of its competence.

A breach of gender equality

Ironically, the three complainants invoked the violation of gender equality, protected by our Charters, in support of their demand to wear the hijab (or even the niqab if they wish) while teaching.

It is hard to ignore that the hijab has long been the subject of controversy, especially in Muslim societies. Analysis of the historical context surrounding its very rapid progression over the past decades indicates that it is generally accompanied by various forms of social pressure aimed at pushing Muslim women and girls to adopt it.

A number of Muslims, including Islamologists, argue that the hijab is not a religious obligation of Islam, but a sexist symbol stemming from a patriarchal ideology reducing women to their bodies. In other words, the hijab is not an identity and religious marker. Rather, it is a sexist marker of religious extremism of which it has become a symbol, even though it was ultimately adopted by
a circle larger than that of fundamentalist groups.

While it is true that religious freedom implies that everyone has the right to believe what they want, to obey divine laws and to wear religious symbols even in the public space, a democratic and secular society does not is not bound to grant these choices a place in positions of authority within its institutions. The principle of secularism requires the recognition of the right to secular education for all, including unveiled Muslim women and their children, without having to undergo moral and social pressures within public schools.

Amalgamation and diversion of meaning

Opponents of Bill 21 argue that this law stigmatizes Muslim women. But in fact, it is the hijab that stigmatizes unveiled Muslim women. Evidenced by those who dare to denounce the pressures to push them to wear it. But in his 240-page judgment, Judge Blanchard decided to exclude these concrete testimonies and only retain those of the plaintiffs who claim to be potential victims
of the restrictions provided for by the law.

The judge adopted the amalgam put forward by the detractors of this law who confuse veiled women and Muslim women. However, in Quebec and Canada, the majority of Muslim women do not wear a hijab, which means that the law will have no restrictive effect on them. No more than on members of minorities, the vast majority of whom do not wear any religious symbol. Moreover, relying on the report of an expert witness, based on a study concerning blacks in the United States, the judge confused the acceptance of religious symbols and the valuation of cultural diversity, as if one n did not go without the other. These amalgamations have distorted his judgment.

A choice is not necessarily a fundamental right. And the fact that it is made by women is not enough to make it a feminist cause. The UN recognizes the need to combat harmful cultural practices, such as female circumcision, early marriage and the emphasis on virginity. However, these practices are implemented and reinforced by women.

In the mobilization in favor of the hijab, there is a diversion of meaning around an important issue linked to secularism. In view of the growing influence of religious fundamentalism, the restriction of religious symbols in certain functions has been adopted by many democratic countries. This restrictive measure does not stem from racism or exclusion, but from the desire to avoid the introduction
of the religious norm within secular state institutions.

The position of supporting the challenge of the law, justified in the name of anti-racism, ignores the fact that members of minorities who have fled religious fundamentalism in their country of origin support this law, knowing that this liberticidal ideology is expressed through its symbols. As Islamologist Rachid Benzine points out, the world is not divided between believers and non-believers, but between people who support democracy and those who cheat it. The recent judgment is unfortunately on the side of the last.
Yolande Geadah Author, expert witness at the Law 21 trial
LE DEVOIR
https://www.ledevoir.com/opinion/idees/599553/loi-sur-la-laicite-de-l-etat-quand-un-symbole-du-sexisme-religieux-devient-un-droit-fondamental?&utm_medium=email&utm_source=20608&utm_campaign=Courrier+des+id%c3%a9es+%e2%80%93+Week-end+du+1er+mai+2021