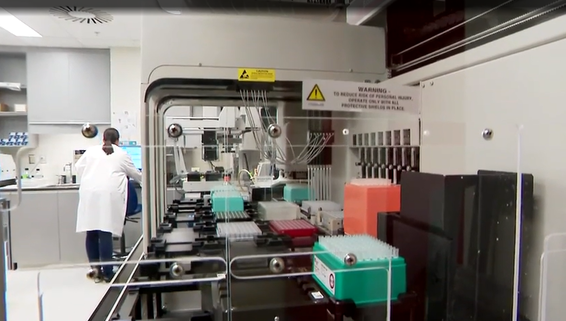 To meet targets set by Ottawa, several universities go so far as to exclude white men in calls for applications for research chairs, a practice that has sparked controversy in academia.

A call for applications from Université Laval for a Canada Research Chair (CRC) in biology has caused a lot of reaction on social networks, following a publication by comedian Guy Nantel on this subject. 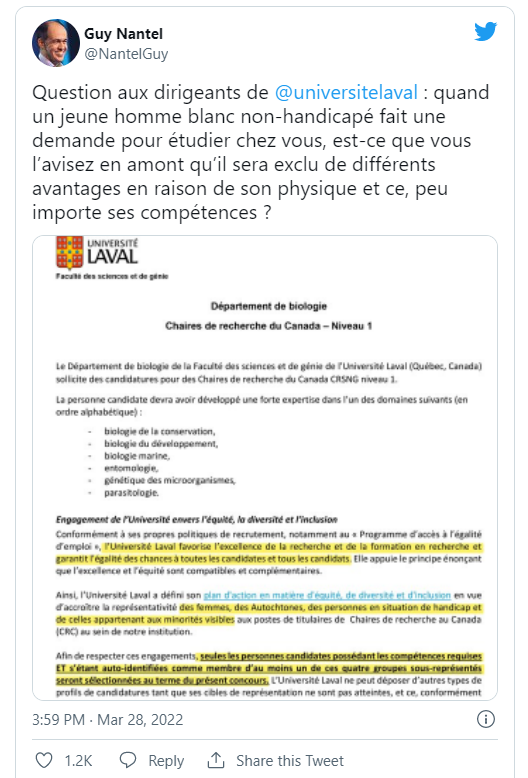 Only applications from women, Indigenous peoples, people with disabilities and those belonging to visible minorities will be selected in order to increase the representativeness of these groups among CRC holders at Université Laval, the document states.

"Only applicants with the required skills and who have self-identified as a member of at least one of the four
under-represented groups will be selected," it reads.

The institution "cannot submit other types of application profiles until its representation targets are met, in accordance with the requirements of the CRC Program," it said.

This is not an isolated case since at least four similar calls for applications published this fall by Université Laval included the same criteria.

Open to women only

The situation is the same in other Quebec universities, which are also subject to the equity, diversity and inclusion targets of this federal program. A similar call for applications was published this fall by UQAM.

The Université de Sherbrooke is even currently looking for a woman to fill a position as a "professor" in climate change, since only female candidates will be selected, according to its website.

In 2017, the Canada Research Chair program introduced new measures to increase the representativeness of the four under-represented groups in academia. Targets were set for each institution, which subsequently identified actions to achieve this.

For some universities, the challenge seems to be less than for others. At the Université de Montréal, it is reported that it has already met the targets set by Ottawa without having to restrict calls for applications to achieve them.

For its part, Université Laval explains that it has put in place these restrictive criteria, which are in line with
the institution's orientations, to meet the federal targets.

"We are committed to achieving our equity, diversity and inclusion goals and we want our researchers to be more representative within our university," said its spokesperson, Andrée-Anne Stewart.

The Syndicat des professeurs et professeures de l'Université Laval is in favour of such measures, on a temporary basis, in the context where the institution has not yet reached the targets set.

Diversity is "very important" for teachers and "measures must be taken so that [these targets] do not remain wishful thinking," says its president, Louis-Philippe Lampron.

But the issue divides academia. Micheline Labelle, professor emeritus of sociology at UQAM, fully agrees with the goal of promoting greater equity and diversity in academia, but is fiercely opposed to the means put in place to achieve this.

Mme Labelle denounces the imposition of "quotas" stemming from federal targets. This measure does not allow priority to be given to under-represented people "with equal competence" since it "does not even give everyone the opportunity to assert themselves",
as in equal access to employment programs.

The sociologist also believes that the federal requirements constitute an "injunction"
since the academic community is forced to comply with them.

"You have to meet the targets or there is a threat of withdrawal of federal subsidies," she says. It seems unbearable to me."