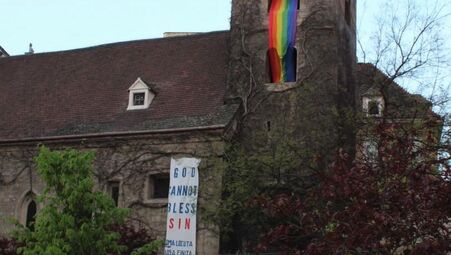 St. Rupert’s Church in Vienna, Austria with the new banner created by young faithful Catholics and pinned to the Church in April, 2021.
VIENNA, Austria, (LifeSiteNews) — When Vienna’s oldest Catholic church draped the rainbow “pride flag” from its bell tower as a sign of defiance to the Vatican’s recent declaration that banned blessings for same-sex couples, young faithful Catholics responded by creating their own banner in support of Church teaching, clandestinely pinning it to the same church.

Video posted to Youtube channel Christus Vincit on April 26 captures four young Viennese Catholics creating the banner and then climbing a ladder at night to attach it to the side of St. Rupert’s Church.
“God cannot bless sin,” the banner states in blue and red words. “Roma locuta, causa finita,” it reads at the bottom.

The Catholic saying “Rome has spoken, the case is closed” means that doctrinal matters are settled by the Church’s teaching authority and once that authority has spoken, the matter is settled and Catholics must assent to the outcome. 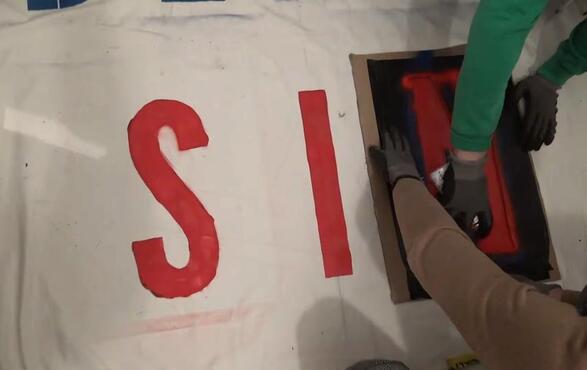 Last month, the Congregation for the Doctrine of the Faith declared that the Church cannot bless same-sex relationships since “God does not and cannot bless sin.” The Congregation stated that it is “not licit to impart a blessing on relationships, or partnerships, even stable, that involve sexual activity outside of marriage (i.e., outside the indissoluble union of a man and a woman open in itself to the transmission of life), as is the case of the unions between persons of the same sex.”
In reaction to the ban, a group of over 300 Austrian priests issued a “call to disobedience,” stating that they would “continue to bless same-sex couples.” Similarly, a group of over 500 German priests vowed to defy the ban and to bless homosexual couples. More than anything else, the Congregation’s declaration spotlighted an already existing schism in the Church consisting of those who do not accept the moral teachings of the Church and the authority that promulgates them.

The young Catholics, who wish to remain anonymous, say their banner “echoes the voice”
of the Church in banning blessings for homosexual couples.

Placing the banner on the church is “how they corrected the unacceptable sacrilegious message on St. Ruprecht’s tower to remind the faithful: Love the sinner, but hate the sin,” a text from the video of the young people states. 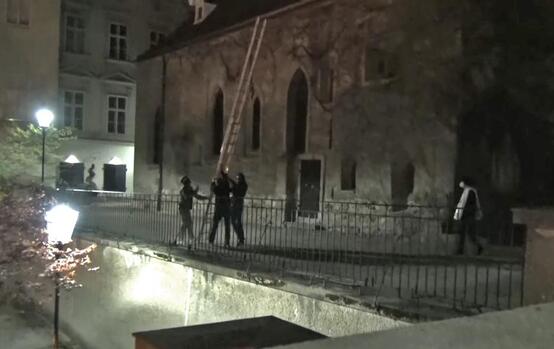 Young Catholics placing a ladder on St. Rupert’s Church in Vienna to hang their banner protesting the gay pride flag hung from the bell tower. SOURCE: Christus Vincit / Youtube screen grabRepresentatives of the group told CNA Deutsch that they saw the rainbow flag draped from St. Rupert’s Church as a
“provocation” that they could not ignore.

“On the one hand, we wanted to show that such a provocation is not simply tolerated in Vienna and, on the other hand, we hope that this might trigger a rethinking among certain officials,” said the group. “We also think that such an action can give other Catholics courage and hope. We actually hope that no further actions will be necessary, but should there be another one, it would arise from the same intention, namely to defend the Catholic faith.”

The group criticized Vienna Cardinal Christoph Schönborn’s opposition to the ban on blessings, saying the Cardinal showed more concern for the “feelings” of people with same-sex attraction than for their eternal salvation.