Young victims of work we don't want to see 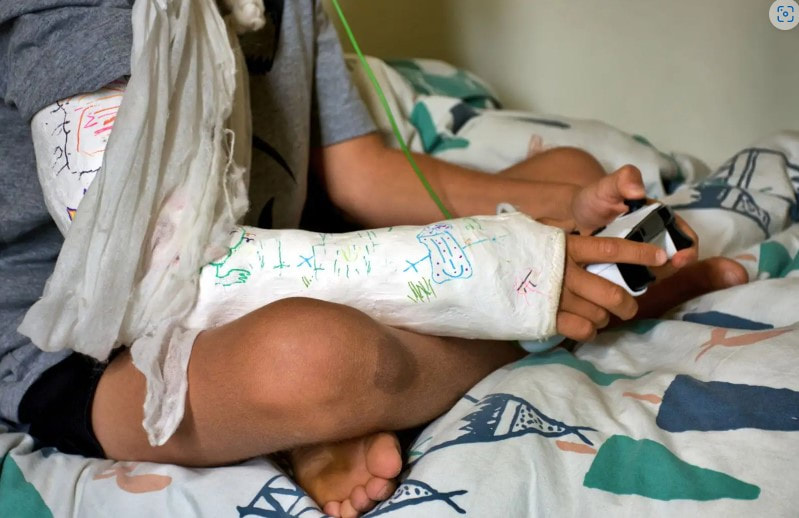 "Who worked last weekend?" Almost all hands go up. Okay, students at Amos High School, ages 16 to 20, are older than average. No wonder they work part-time or full-time. That's why their French teacher invited me, the journalist, to talk to them about occupational health and safety.
"What is the minimum legal age to work in Quebec?" The answers are pouring in, all wrong. The right answer, however, is simple... Child: There is no legal minimum age, and has been for 42 years. Yes, an 11-year-old schoolgirl can work every night of the week if her parents agree. From the age of 14, she won't even need to ask their permission. Because at this age, in terms of employment, "the minor [...] is deemed to be of full age," according to the Civil Code.

It should no longer be surprising to learn that, every year, hundreds of children are seriously injured enough to be compensated by the Commission des normes, de l'équité, de la santé et de la sécurité du travail (CNESST). In 2021, this was the case for 203 children under the age of 16; The youngest was 12 years old. We know that these figures underestimate the magnitude of the problem. Many young people are unaware of the existence of the CNESST and, among those who do know it, some are reluctant to make a claim for fear of losing their job.
Is this acceptable?Hundreds of tweens and teens, maybe even hundred, are injured at work every year. This is intolerable, of course — one injured person will always be one too many—but is it acceptable? This is the much more difficult question that Quebec refuses to ask.

At the back of the class, Laurie-Anne raises her hand. Impossible not to see his candy pink nails. She was 15 when she burned her right forearm while cleaning the popcorn machine at the movie theater where she worked. "It hurt a lot," she says, "and I continued my work crying." She kept pictures of the blister, impressive. Three years later, the scar is still visible. No one had told her that
the scrub she splashed with required the use of protective gloves.

Some will keep less superficial scars. Take the case of young workers who present to the emergency rooms of the four Quebec hospitals that participate in CHIRPP (Canadian Hospitals Injury Reporting and Prevention Program), a federal trauma research program. Between 2011 and 2021, 136 children under the age of 16 were treated for an accident at work; The youngest was 12 years old. In this group, one in four was seen for "head trauma", "eye injury", "fracture" or "serious injury including amputation". Yes, amputation.

I ask again: is this acceptable? Is this the price that Quebecers are willing to pay for the benefit of companies that recruit children cheaply? (Their salary is equal to that of adults, but not the social contributions paid by the employer, which are somewhat lower.) The answer is yes, based on the reactions to my articles since... 31 years old.

In "La semaine de 60 heures", published inL'Actualitéin 1991, I revealed that the 1907 law prohibiting child labour had been repealed byRené Lévesquein 1980 as part of the reform of occupational health and safety, which had escaped almost everyone. Tweens worked at night legally! This "paper" caused an uproar. The Liberal government of the day asked four advisory councils to comment. One of them, the Family Council, called on Quebec not to prohibit child labour, but to "mark" it.

Robert Bourassa's government turned a deaf ear, and it was not until the victory of PQ member Lucien Bouchard in 1995 that the Act respecting labour standards was amended. It now prohibits night work for school-age children
and tasks "likely" to harm their health or schooling.

A legal minimum age Noting the progression of accidents, I returned to the subject over the decades. In "Se tuer à l'œuvre", published inL'Actualitéin 2008, I focused on three deaths that had occurred that year: a 14-year-old garbage collector (in Gaspésie), a 13-year-old farm worker (in Montérégie) and a 16-year-old sawmill employee (in the Outaouais). Last spring, this time inLa Presse, I reported that the number of victims had exploded, with 203 injured under the age of 16 in 2021, due to the labour shortage. That is to say four times more than
the figure I gave in my first article... published in 1991!

Before the election campaign, Liberal MP Marwah Rizqy raised the issue in the National Assembly, but the theme was not raised, not even lip service, in the leaders' debates. Clearly, more than one political party is afraid of upsetting parents who are proud to see the greatest one work.
François Legaultdoes not like the "quibble", and the adoption of a legal minimum age, like all the other provinces, could cause a whole one. Especially since the adults, in this case, find it difficult to approach the subject other than by their personal experience, generally good, fortunately. They forget a little quickly the risks of all kinds that teenagers run at work. Too bad if they burn themselves with oil at 168 degrees (cooking temperature of fries) or if they are sexually assaulted in the workplace?

The collective interest, the one that would make us look beyond the tip of our nose, value education in the broad sense as well as in the narrow sense and, above all, take into account the interests of the child, is swept under the carpet. In 2016, Canada ratified Convention 138 of the International Labour Organization, thereby committing to setting a minimum age and gradually increasing it. Not to mention that, as early as 1991, the Government of Quebec declared itself "bound" by the Convention on the Rights of the Child, which provides for the setting of a minimum age for admission to employment...

LE DEVOIR
[Opinion] Young victims of work that we do not want to see | The Duty (ledevoir.com)
UP